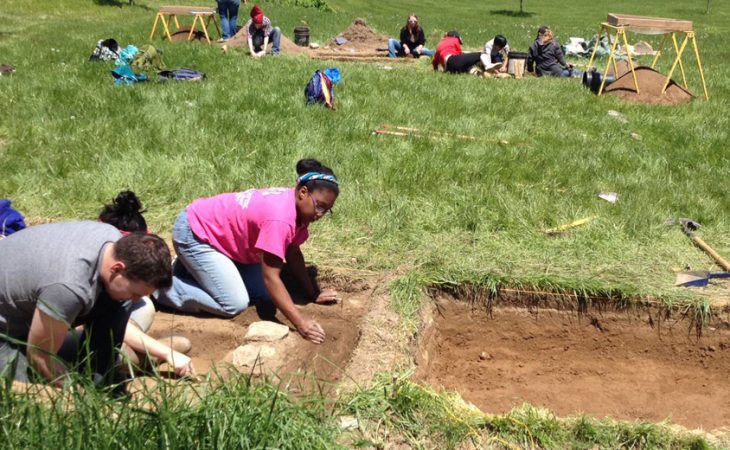 Transylvania University students are getting worldwide attention this week for participating in an archaeological excavation that discovered a Civil War photography studio — and evidence soldiers dyed their hair for portraits.

First reported in the Lexington Herald-Leader, the story has become international news, reported by publications like Newsweek and the UK’s Daily Mail.

Transylvania students in recent years have traveled to Jessamine County south of Lexington to work at the Union Camp Nelson as part of anthropology professor Chris Begley’s May term class Field Methods in Archaeology.

“You never know in archaeology what people are going to pick up on,” Begley said. Sometimes it’s the sensational stuff — like finding gold at a shipwreck site. “Other times it’s just the odd or interesting things like the use of hair dye in the Civil War.”

The Transylvania students were assisting Stephen McBride, director of interpretation and archaeology at Camp Nelson. “I’m glad to see Steve’s work getting attention, because he’s done a lot of important work there and elsewhere,” Begley said.

One day Mirre was cleaning and cataloging artifacts from a small plot of land where she had been working when she noticed a stencil. She said McBride then carefully unfolded it to reveal the name of C.J. Young. Turns out, this was used to mark the name of the young photographer — who went on to open a studio in Lexington — on the images he created for the soldiers.

The stencil was one of several artifacts, including picture frames, that led researchers to believe they’d found a photography studio. Begley said he knew there had been a store near where they were working at the camp, where civilians were allowed to set up businesses during the war.

Transy students also found bottles that once contained things for soldiers to fix their hair before getting their pictures taken.

“The researchers from Transylvania University in Lexington initially thought that the bottles were used to hold medicine,” according to the Newsweek article. “However, when the team started putting the pieces of glass back together they noticed some featured embossed lettering, with names such as ‘Bear’s Oil,’ ‘Christadoro’ and ‘Dr. Jaynes.'”

Citing photography books, McBride said the soldiers who had light-colored hair may have been using dye to keep the black and white photos from making their locks look white or gray, according to the article.

The headlines of the stories reporting the Camp Nelson finds focus on the fact the men dyed their hair for photos.

Mirre is pleased with the attention given to the work at Camp Nelson, which is a national monument.

“I am very excited that the history and stories of individuals at Camp Nelson are becoming public knowledge,” she said. “So many amazing things were happening there.”