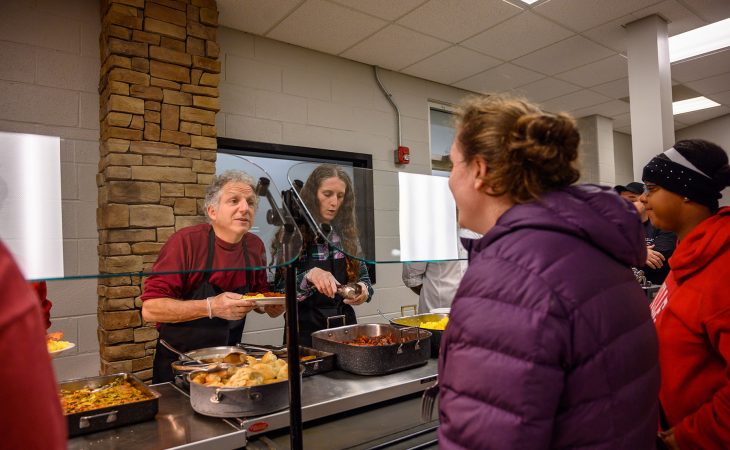 All around Transylvania’s campus during finals week, students find quiet locations to study and prepare for the week. Though it may seem odd, one of the most crowded places on campus during the week is the cafeteria at 9 p.m. the night before exams begin.

On the Monday of finals week, known as Reading Day, Transylvania’s Student Activities Board puts on Brinner, where faculty members come together to serve “breakfast at dinner.” It’s a way to provide a fun, late-night snack option to help boost students’ morale before finals begin and a way for professors to show appreciation for their students’ hard work during finals week.

Brinner is “one of our iconic signature events that we have every semester,” said Abell. “It’s just a fun event that students can use to take a break to enjoy time with their friends while they’re preparing for finals.”

This year was the first time new food service partner Bon Appétit participated. According to Smith, SAB began communicating with them in October to secure the date and the amount of food.

“SAB is very thankful that the Bon Appétit staff stays late to prepare an exceptional Brinner each semester,” said Smith.

This Transy tradition allows students a moment of stress-free time during finals week, as well as time to share with friends, faculty and staff as the semester comes to a close.