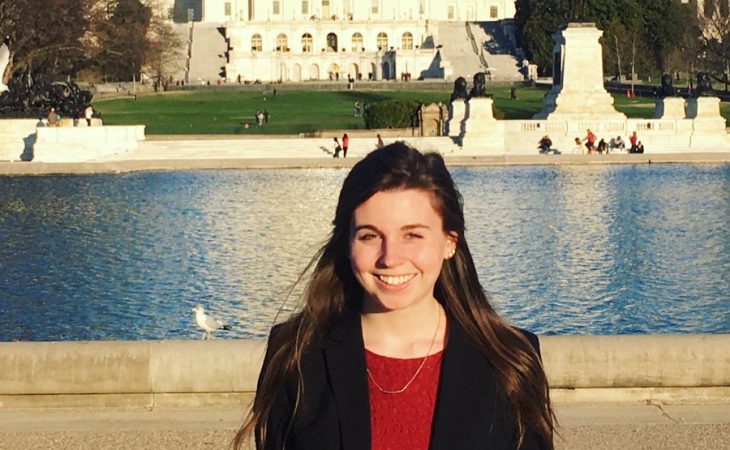 Lauren Gilbert ’18 remembers her father putting a book about the foreign service into her hands at the ripe old age of 12. She took such an interest in the field that she even enjoyed taking the quizzes. A few years later, her mother introduced her to Tracy Kidder’s book “Mountains Beyond Mountains” about Paul Farmer’s commitment to solving global health problems. A self-described “stubborn lover of fiction,” Gilbert put off reading the book, but once she cracked it open, her future changed.

“Kidder’s telling of Paul Farmer’s story inspired me to pursue public health as a way to achieve the goal of serving my global community,” she remembers. Rather than becoming a physician for a group like Doctors Without Borders, she became more interested in getting involved at the policy level.

At Transy, Gilbert not only reread Kidder’s book, but she interacted with the author in a workshop on campus. It was one of many experiences as an undergrad that helped define her interest in having a broader impact through public health.

“The workshop provided a unique opportunity for me to not only meet the man who helped change my own path,” she recalls, “but also to see how he humanizes individuals that represent larger social issues.”

Gilbert interned in Congress through the Henry Clay Internship Program as well as with the Kentucky Water Resources Research Institute. But it was by studying in Israel, funded by her William T. Young Scholarship and a national Chi Omega scholarship, that her focus shifted firmly toward security and conflict management in the Middle East and, in turn, “to pursuing water security, a subset of public health.” She began to view access to water as a human right.

Returning to Transy, she shifted gears from law school to graduate school at the Johns Hopkins School of Advanced International Study. She spent her first year studying in Bologna, Italy, and the summer interning in the U.S. Embassy in La Paz, Bolivia. In Bolivia, she found parallels with water security issues in the United States, including in her home state of Kentucky.

Even as an undergraduate, Gilbert’s focus was on people with water-related needs closer to home. “Just a 30-minute drive from Transy’s campus,” she notes, “people have to put out swimming pools to collect rain water to shower with because there’s no indoor plumbing; they have outhouses still, and those outhouses leak into the streams where they get their drinking water from later.”

As she completes her degree at Johns Hopkins, Gilbert is already gaining experience in the private sector. She’s employed by a development consulting group, IMG Rebel Group.

“I get to work on infrastructure projects (including water) in Latin America,” she explains. “I help with finding projects and submitting proposals, both in English and in Spanish. I’ve also been working on translating client deliverables. Incredibly interesting work!”

Gilbert is drawn to big projects that can make a significant difference in people’s lives. She especially likes analyzing the broader context, “working to make sure we’ve seen all of the implications and pitfalls.” Understanding the big picture helps with safeguarding vulnerable populations, but also in seeing how connected the world is and the challenges countries share.

“Anywhere you go, even in the most developed areas, there are still communities that lack basic services,” she says. “Having seen that and having worked on that firsthand … it’s difficult ever to forget.” She feels a sense of responsibility and wants to ensure clean water access for people around the globe — and for the people of Kentucky.

“The fact is,” she explains, “looking at a water map of Kentucky, and at what is and isn’t sustainable, all you see is red. There are very few systems that are green.” Eventually, she hopes to improve water conditions in her home state.

“I think I can do that best,” she says, “by taking the time now to go out, gain experience and see the ways that different countries are handling these issues.” Then she’ll bring that knowledge back and put it into action, whether it’s on Capitol Hill, with a lobbying group or directly on development projects in Kentucky.

Lauren Gilbert writes about her journey into water security in the next issue of Third & Broadway.