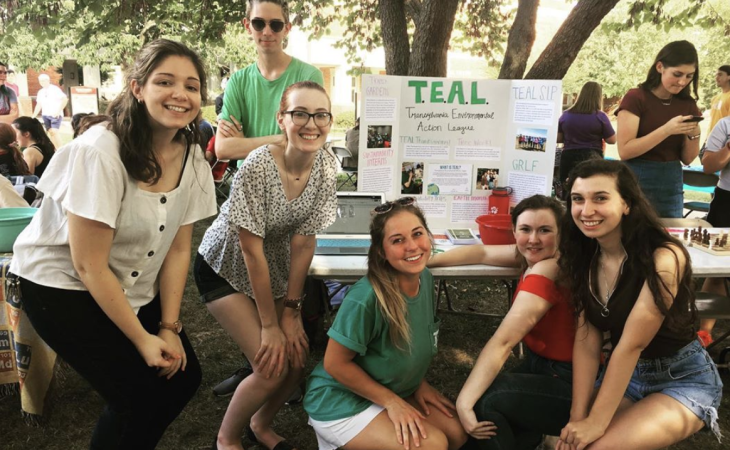 The Saturday before Thanksgiving, someone walking past a residence hall kitchen at Transylvania University will likely catch a whiff of holiday cooking — not from a roasting turkey exactly, although a Tofurky isn’t out of the question.

The food will be for the Transylvania Environmental Action League’s annual vegetarian Thanksgiving dinner for the campus community on Nov. 23. It’s the biggest event of the year for the group, which is one of the largest and most active student-run organizations at Transy.

“We’re trying to show people how they can cut down on meat consumption,” TEAL President Sydney LaRue ’21 said. She pointed out how the group prepares the meals for the potluck in dorm kitchens to show fellow students how they too could prepare vegetarian meals, thereby lessening their environmental footprint.

Funded by the school’s Student Activities Board, the TEAL Thanksgiving is becoming a Transylvania tradition. Between 60-80 members of the campus community have been attending the dinner, which can feature a range of dishes from stuffing to tofu tikka masala.

The meatless meal is one of many TEAL events. With a core group of up to 20 students — many more are on-and-off members — the organization sponsors hikes like one earlier this year to Red River Gorge with anthropology professor Chris Begley, who taught them skills they’d need if they were lost in the woods.

Not surprisingly, Earth Month — April — is an active time for TEAL. Founded in 2010, the group organizes events such as this year’s get-together to transform used water bottles into herb planters. Also for Earth Month members have explored the Clark County Solar Cooperative.

TEAL also co-hosts events with other groups on campus and shares student concerns about sustainability with the university’s administration on issues such as recycling. And the group is represented through student positions on the Green Revolving Loan Fund board, which comes up with ecological and economically sound investments. For instance, junior Caroline Hawk proposed outdoor table umbrellas that gather solar energy to charge electronic devices at the Campus Center that’s under construction.

There are various reasons students get involved with TEAL, whether they’re concerned about preserving the environment, like to hike, or simply want something to do.

Many of them are studying STEM fields, especially biology. “They very often will take what they learn in class and then share it with the group, or they can bring what we do in TEAL into their classes,” LaRue said. “I’m a history major so I don’t spend a lot of time in the sciences, and I’ve learned a lot through being a part of TEAL.” This interdisciplinary aspect complements her liberal arts education.

Plus, LaRue feels a strong connection to the natural world. “I’m really passionate about nature and the environment and trying to protect it the best we can.”