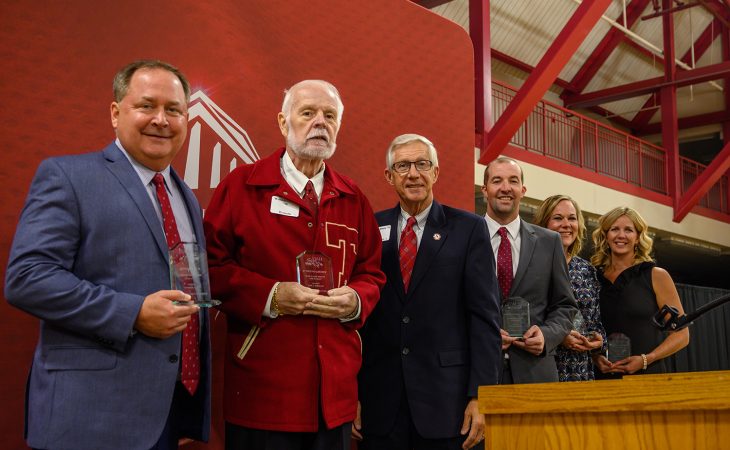 A new class of Transylvania University athletic legends were inducted into the Pioneer Hall of Fame on Saturday at the Clive M. Beck Center during the 28th annual Hall of Fame Banquet.

They grow the total number of Pioneer Hall of Famers to 131.

“I continue to be astonished each year by the caliber of student-athletes that we are inducting into the Hall of Fame,” said Holly Sheilley, vice president for athletics. “Transy has definitely been blessed with a rich history of student-athlete and team success, which this induction class is no exception.”

Gividen played for the Transylvania men’s basketball team from 1974 through 1978 and was one of three seniors on the first 20-win team under head coach Don Lane in 1978. Gividen led the 1978 team to a 20-6 overall record and an appearance in the NCAA South Regional Tournament. At the time of his graduation, Gividen shared the record for most games played by a Pioneer men’s basketball player with 107. At the time of Gividen’s graduation, he also held the record for most points by a Transy freshman in a season with 361 points. Gividen is 35th all-time on the Pioneer scoring list with 1,210 career points.

Orwick competed for the Transylvania swimming and diving team during the golden ages of the late 1980s and early 1990s. The Class of 1991 graduate served as a team captain in his junior and senior seasons. Orwick remains an ardent supporter of Transylvania Athletics today as a local business owner. He is being inducted for his extraordinary contribution to the athletic department.

McCoun was a key foundational player of Transylvania’s early softball teams; the Class of 2004 graduate still ranks in the top six of several major statistical categories. McCoun ranks third all time in career runs batted in for Transylvania softball with 141 RBIs and fourth all-time in career home runs with 26. As a freshman, McCoun led the team with a .643 slugging percentage and was second on the team in batting average (.381).

A two-time Second Team All-American in 2007 and 2008, Sutherland was one of the first star athletes during the genesis of the current Transylvania men’s golf dynasty. He is the first Transylvania men’s golfer to earn Heartland Collegiate Athletic Conference Most Valuable Player honors, doing so in back-to-back seasons in 2008 and 2009. A three-time All-HCAC selection, Sutherland led the Pioneers to conference championships in 2008 and 2009 and berths into the NCAA Tournament in those seasons. At the 2008 NCAA National Championships, Sutherland shot 16-over-par for four rounds to turn in a 72-hole score of 300, one of the best championship performances ever by a Pioneer men’s golfer. Sutherland also completed his career as an Academic All-American in 2008 and 2009.

The Transylvania Athletic Department has annually held Hall of Fame ceremonies since 1992.