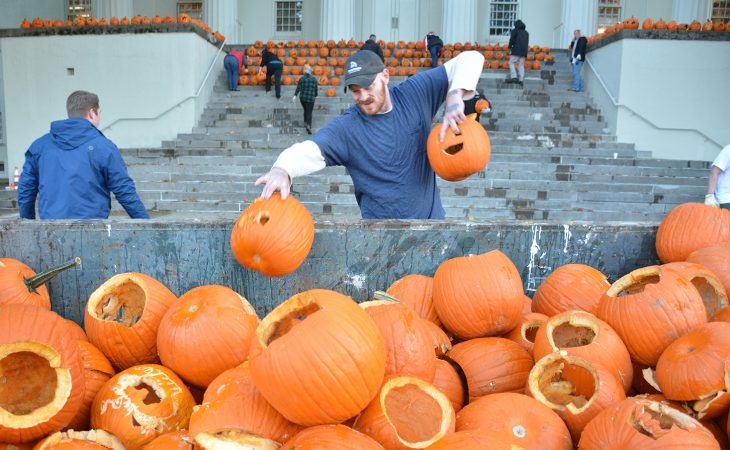 A handful of slimy pumpkin guts may not sound very tasty, but it’s a Halloween treat for some critters — especially ones that look like they’re wearing masks.

After carving more than 600 jack-o’lanterns for this year’s PumpkinMania, Transylvania University donated the scooped-out pumpkin guts to the Kentucky Wildlife Center.

“I would say the ones that like it the most are the raccoons,” said Beth Knapp, assistant manager for the nonprofit on Georgetown Road.

In fact, eating pumpkin seemed to help the ones that were feeling nauseous. “That was an extra bonus,” said Knapp, who added how much she appreciated the gift of guts.

In addition to the raccoons, most of the rescued animals at the center — from skunks to ducks to groundhogs — enjoyed the Halloween treat.

Kelsey Ley, manager of Transylvania’s campus appearance, said she thought the donation would be a great way to help out wildlife. “Plus with our mascot being a bat, what better way to honor Raf than helping animals in need.”

Additionally, Ley said finding a good use for the discarded guts is part of a campus commitment to sustainability. (Along those lines, the school sources the pumpkins locally from Overman’s Bluegrass Fruits and Vegetables.)

Some of the jack-o’-lanterns themselves are headed to the center for an additional post-Halloween snack. The rest are headed to the Haley Pike compost facility where a city contractor will process them into mulch, according to the City of Lexington.