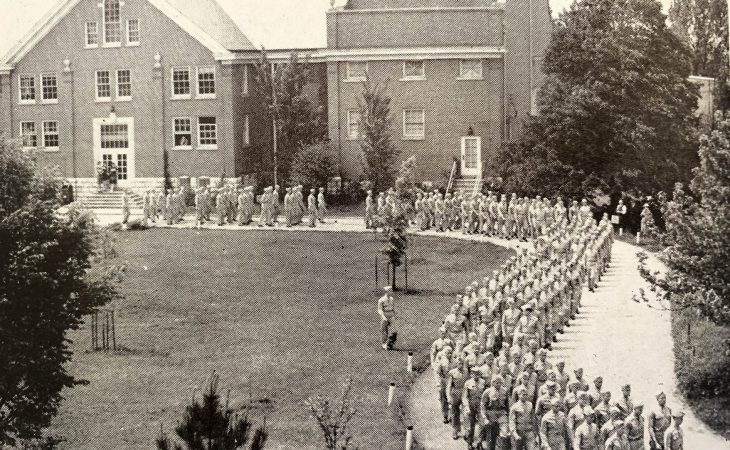 As so many yearbooks do, the Transylvania Crimson printed the names and photos of its students in the 1945 publication. But a whole page of that year’s Crimson was dedicated to 49 of their fellow students, “[the] boys and girls [who] would have been enrolled at Transylvania during the year ’44-’45” but for a world at war.

“This is the story of a school year — and a tough one,” the editors wrote.

… Transylvanians have not been oblivious to the historic period in which they have been privileged to be in school. The class of ’45 were freshmen when Congress declared a state of war to exist between this country and the Axis powers. They saw at first hand the effects of war on the college — the decrease of enrollment, the coming of the Signal Corps and the Army Air Cadets to the campus. They are keenly aware of the Transylvanians sprinkled around the globe in the uniforms of Uncle Sam. Transylvanians remember vividly a sunrise service at which a male quartet sang the Battle Hymn of the Republic and the flag was lowered to half [staff] in tribute to the President. The class that started to college when the war was beginning are graduating just as half of the war is won.

Among the members of the class of 1945 honored in the yearbook was 2nd Lt. Jack G. Adair of Paris, Kentucky. Adair matriculated to campus in the fall of 1941, but by 1943 was co-piloting B-17 bombers in the Army Air Corps. Assigned to the 96th Bomb Group of the 338th Bomb Squadron, his aircraft was shot down by enemy fire on July 28, 1943, over the North Sea. His remains were never recovered, though his name is inscribed on the Tablets of the Missing at Cambridge American Cemetery in England.

During World War II, Transylvania’s campus became home to the 322nd College Training Detachment of the Army Air Corps. “For many years to come, Transylvania will be a part of the men who were stationed here,” wrote the editors of the 1944 Crimson yearbook. “The influence of the [A]rmy men on the college will be more spectacular; the flow of the direction will be more profound.”

The 1944 Crimson included 12 pages of corps class photos, stories and recollections. “The purpose of printing these is twofold: to give the aircrew students a record of their associates at the college, and to give Transylvania students, and other interested persons, a record of an important and pleasant war activity on the campus.”

On this Veterans Day 2019, 75 years after the end of World War II, we remember Jack G. Adair ’45, the Transylvanians who have served in the military across the years, and the military members whose training began on the college’s campus and who, for a brief time, shared our company.