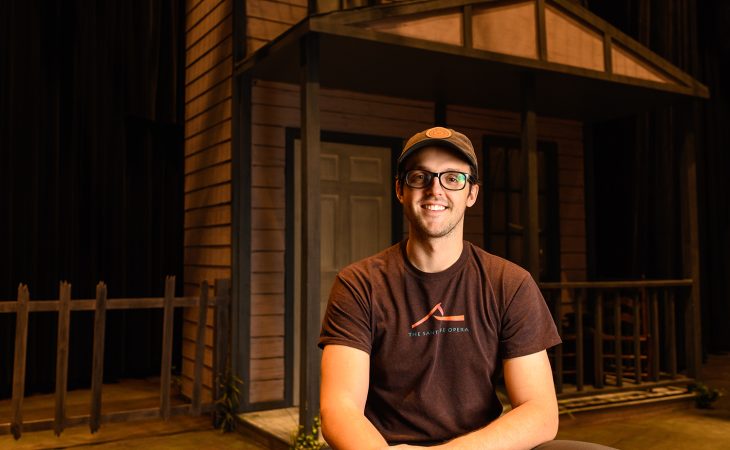 Instructor Daniel Bennett may be new to Transylvania University’s campus, but he’s got ambitious plans for the theater department. Serving as the primary set designer and technical director, he discussed with me the set he’s building for Transy’s fall production of William Inge’s “Picnic,” which begins Thursday in Little Theater.

For Bennett, who also was a stage crew supervisor for the Santa Fe Opera, two things seemed to be his biggest motivators: the students and the play itself. I asked him to explain more about both of these motivations as he takes on what’s been described as “the most ambitious or biggest set” that the department has completed in a long time.

He explains that for both “Picnic” and future Transy productions, he “wanted to make sure the students have experience and pride in building big sets” — something typically only those in larger institutions have the opportunity to do. Since late September when he began building, he’s had about 15-20 students consistently working with him, and he’s been able to monitor and push them and their progressing capabilities. His pride is apparent when he tells me that one day while building, one student stopped for a minute to tell him that they thought it was “weird” that they were creating this very large and realistic set, almost like they didn’t know they were even capable of it in the first place.

Bennett also explains how the show itself pushed him to create a set like this, which depicts two worn and weathered houses and a yard between them. As I am unfamiliar with the show, he tells me that “Picnic” is a “really strong female-led play, where the female characters are finding their identity, instead of what society has placed on them.” It shows “the struggle of personal confinement felt by the characters,” and he wanted the set to reflect that. Bennett also explains that no matter the size and intricacy of the two houses, they’re meant purely to “enhance the characters and their stories” so as not to distract.

It’s an ambitious set design, but one Bennett has convinced me was the only, and the right choice for this production. Come and be convinced yourself.

You can see “Picnic” from Thursday through Sunday and Nov. 21-24. Reserve tickets.

Annebelle Klein is a senior at Transylvania, majoring in writing, rhetoric, and communication. She is a work-study student in the Office of Marketing and Communications.