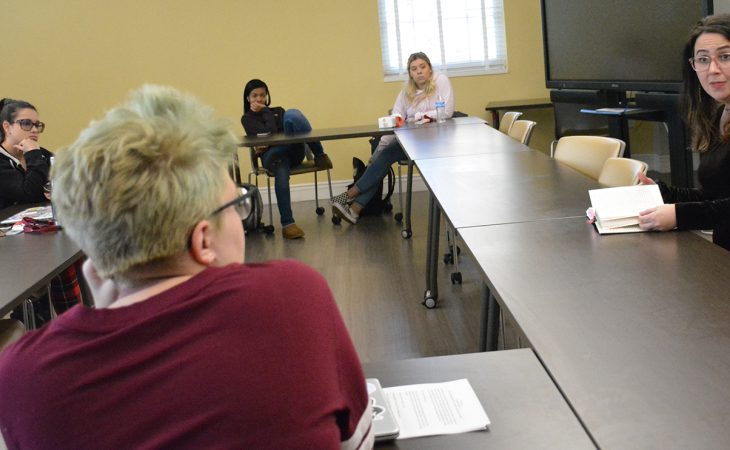 Hindman’s visit was a prelude to tonight’s Cocktails & Conversation at The Mane on Main. Co-hosted by Transylvania, the event will include a conversation between her and KET’s Renee Shaw. It’s part of the Kentucky Book Festival, which is presented by Kentucky Humanities; read more about the university’s involvement in this weeklong event.

“It is a unique format,” Hindman said of Cocktails & Conversation. “I’m really looking forward to meeting Renee Shaw.” She added that whether or not someone has read the book, she’d be happy for them to come out and ask her anything about it.

Watch the trailer for Hindman’s a debut memoir, which was named an Amazon Best Book of 2019.

Hindman’s writing has appeared in the New York Times, McSweeney’s, Brevity and Hippocampus. She holds a B.A. in Middle Eastern studies and an MFA in creative nonfiction writing from Columbia University and a Ph.D. in English from the University of North Texas. She teaches creative writing at Northern Kentucky University and lives in Kentucky.

About the book (from publisher W. W. Norton & Company)

When aspiring violinist Jessica Chiccehitto Hindman lands a job with a professional ensemble in New York City, she imagines she has achieved her lifelong dream. But the ensemble proves to be a sham. When the group “performs,” the microphones are never on. Instead, the music blares from a CD. The mastermind behind this scheme is a peculiar and mysterious figure known as The Composer who is gaslighting his audiences with music that sounds suspiciously like the “Titanic” movie soundtrack. On tour with his chaotic ensemble, Hindman spirals into crises of identity and disillusionment as she “plays” for audiences genuinely moved by the performance unable to differentiate real from fake. “Sounds Like Titanic” is a surreal, often hilarious coming-of-age story. Hindman writes with precise, candid prose and sharp insight into ambition and gender.