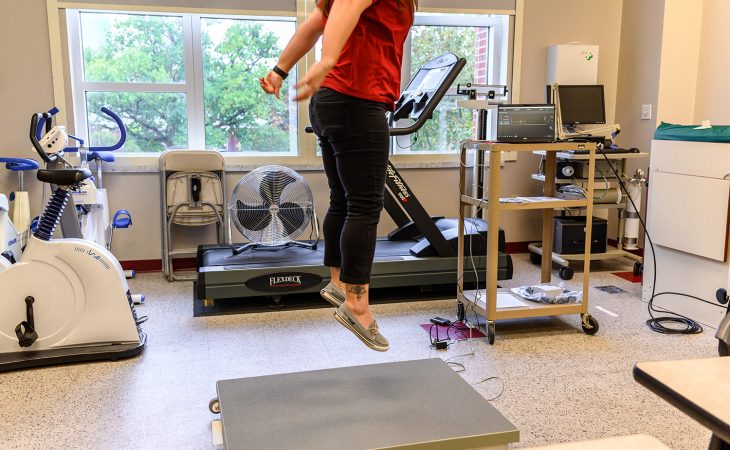 What goes up must come down — and the landings aren’t always pretty.

How people come down wrong after a jump is one of many useful things Transylvania University students will learn from a piece of equipment that will help keep athletes healthy and in top shape.

The exercise science program this past Friday installed an AMTI force platform, which measures variables like how much power someone’s legs are using to push upward in a jump and how much force is pushing a knee inward in a landing — something that could tear an ACL and bench a player for a season.

“It’s really a nice piece of equipment,” said JJ Wallace, assistant professor of health and exercise science. “Outside of the medical community and outside of large sports labs, it’s very rare to see one of these.”

Students will be able to gather their own quantitative data in the form of numbers and graphs, like a line showing spikes and dips of negative and positive forces against the platform. They can then compare their findings with existing scientific data to see which tissues are in danger of injury. Players will use this information to adjust their training or conditioning.

Wallace plans to teach a Sports Biomechanics course centered around the platform during the upcoming May term. Also, students could gather data from sports players before and after a season to see how their training is affecting, say, power increases throughout a jump.

The force plate also has a camera that can show with arrows whether or not a person’s center of pressure is running up from the ground through the hip in a straight line. (It could be bad if it isn’t.)

“There are a lot of different things that we could look at,” Wallace said. “It’s a great teaching tool.”

And it’s not just something you read about it in a book — you’re seeing for yourself.

“I think it’s invaluable for students who want to go into the rehabilitation sciences, because they’re going to have to know what abnormal and normal forces are in tissues,” Wallace said.