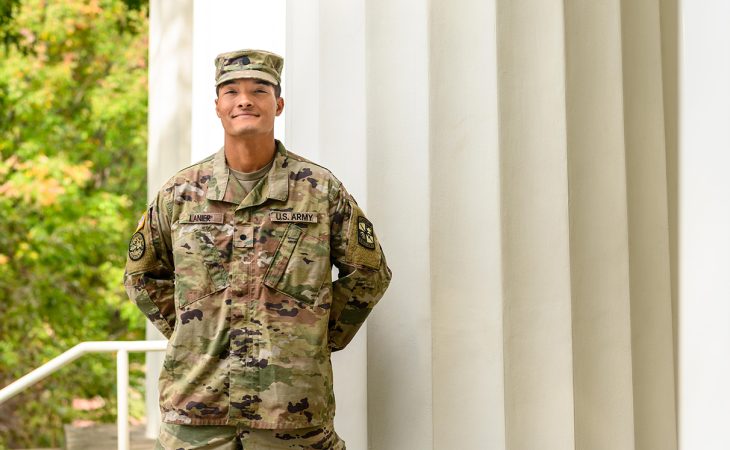 The Transylvania University sophomore from Versailles, Kentucky, became a cadet last week during an ROTC contracting ceremony at the University of Kentucky’s Buell Armory.

Transy has a partnership with UK for students to participate in ROTC.

The fact that Lanier’s tuition is paid through the program — and that he wants to serve his country — made ROTC an attractive path. Lanier, who’s also minoring in philosophy, plans to put his Transylvania education to work as an Army chaplain once he graduates and becomes a second lieutenant. He has an eight-year commitment to military service after graduation.

Each Tuesday Lanier attends a two-hour lecture at UK on topics such as leadership styles. Then on Wednesdays, he has a field lab — this past week he and other cadets learned advanced land navigation, plotting coordinates on a map, for instance.

“It really teaches you about personal accountability, responsibility and what it means to truly have a grasp of your own future,” Lanier said of the ROTC. As long as you’re passionate about your academic studies — and not always playing catch-up with your assignments — it’s a good option to cover tuition costs and have job security after graduation, he said.

It can be stressful, though. “You have to definitely manage and balance your time,” said Lanier, who’s also in the National Guard. But that’s good training for a future officer.

Being chaplain in the military, Lanier will be exposed to a variety of cultures, which interests him as an anthropology major.

He’ll be counseling his fellow service members who will come from all walks of life. And on deployments he’ll experience different societies and see how their belief systems influence things like sustainability and future development.

This can lead to a fresh way of looking at the world. Because of our own biases, we often ignore the importance of others’ cultural beliefs, Lanier said. “I like opening up my mind in that regard.”