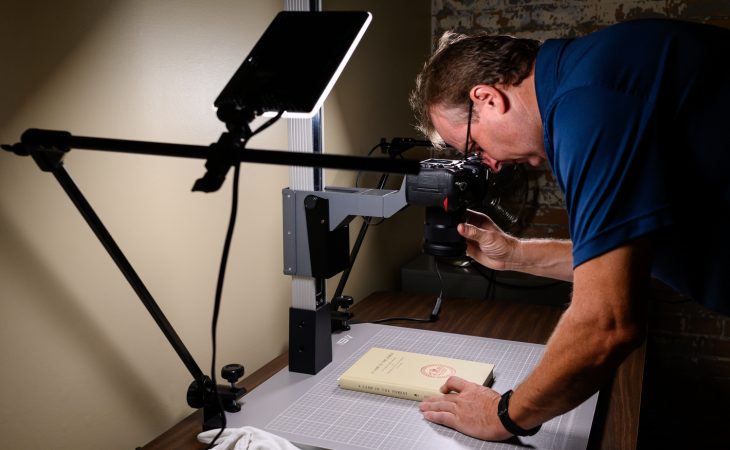 Embodying this year’s campus theme of resilience, Transylvania University’s library staff were undaunted by a big setback and worked hard in a collaborative effort with other institutions to make sure their collections remained available online.

For around 20 years, several Transylvania collections — including 19th-century medical writings — were in the Kentucky Digital Library hosted by the University of Kentucky. (UK had scanned the documents in.) A couple of years ago, UK informed Transy and other participating institutions that they planned to discontinue the statewide database and host their own digital collections elsewhere, said Jason Cooper, Transylvania’s technical services librarian.

Cooper then did two things. He worked with UK to at least get backup copies of the documents. And he started discussions with the Kentucky Virtual Library to help develop an alternative.

“Since that time, a core group of about a dozen librarians statewide have been working to establish a new cooperative,” Cooper said. “To date, Transy joins 20 libraries and cultural institutions who have signed up to participate in the new Kentucky Digital Library.”

The bulk of Transylvania’s documents on the old UK site included 43,000 images of theses from 1820-59, when the university had a medical department. Director of the Library Susan Brown contracted out the job of loading these onto the new KDL site — and then Cooper, along with Digitization and Metadata Specialist Kevin Johnson and student worker Maggie Muehleman ’21, cleaned up the metadata for these records. “We would not have been able to turn around this project so quickly without Susan’s leadership and her ability to spend some Special Collections gift funds to get this done,” Cooper said.

Cooper and Johnson also have presented their work on the project at meetings across the state.

These Transylvania librarians have cause to celebrate: The new Kentucky Digital Library launched today.

Hosted on the Kentucky Virtual Library website, Transy’s collections include over 1,700 theses and the papers of Jane Haselden, who graduated from Transylvania in 1926 and served as a WWII civil aviator at a time when not many women even had a pilot’s license. There are also around 100 photos (mostly from around Lexington) that were collected by local historian J. Winston Coleman, and issues of The Rambler student newspaper from 1965-72.