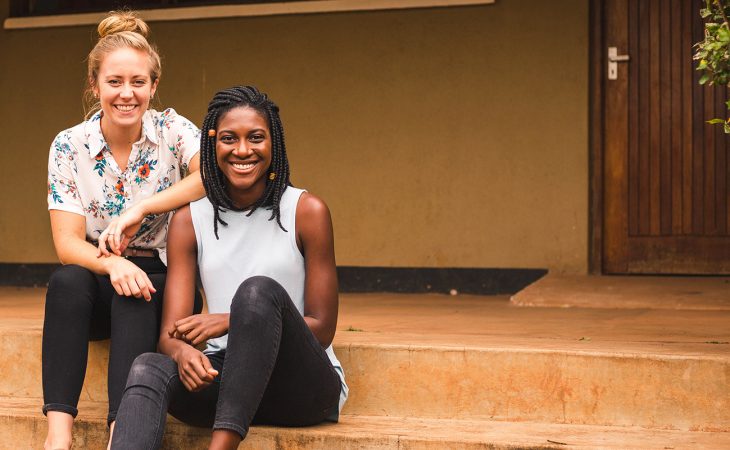 When I entered Transy in 2010, I was freshly 18 and full of wide-eyed curiosity at where my college experience would lead me. Though I loved school, I wasn’t quite sure if the world of academia was for me. I had an undeniable passion for travel and experiencing new cultures, and wanted my college experience to foster that. During orientation, a professor explained May term and mentioned designing your own course that catered to your passions and your major. Alongside my roommate, we immediately set an appointment to learn more about the possibilities. After months of conversation and collaboration with staff, family and nonprofits, we successfully created a May term course that would take place in the southeastern corner of Haiti.

We traveled to Haiti with the objective to work in a developing clinic and document our findings. Though originally on the medical track, when we returned, I immediately changed my major to education. I had found enjoyment in aiding in the Haitian schools, and I knew that there was something in it for me. While I had declared my major, I knew that utilizing it wouldn’t be in the traditional U.S. classroom.

The day after commencement in 2014, I boarded my sixth flight to Haiti since that first May term adventure. A language once unfamiliar, I spoke with confidence. People that were once strangers, were now some of my closest friends. My days and months spent there were full of meaning, and I learned some of the hardest lessons that poverty and pain have a way of teaching. After ending my commitment to Haiti, I returned to my roots, teaching in Kentucky for two years. During my time as a teacher, I began wrestling with the idea that there was more for me. My former Transy classmates and dear friends reminded me what brought me joy and challenged me to go after it. I sold my belongings and boarded a flight to Uganda in 2016, with a year and a half commitment to teach at a rural orphanage. I had never even been to Africa, but I felt an assurance that I was following the right path. For 18 months, I poured my heart into students, friends, coworkers and the community.

In Uganda, my friends and peers shared story after story of feeling stuck. Feeling purposeless. Feeling defined by poverty, by their identity as “vulnerable.” And I stirred and pondered with each story. What programs are available for young adults in Uganda? What avenues are available and realistic? How can I help my friends discover a practical next step for their days ahead? I found leads, but came up empty in the end, feeling defeated and desperate for answers. It wasn’t fair that the opportunities for vulnerable, impoverished youth were unemployment or undignified work.

It’s now three years since I boarded my flight to Uganda, and I now proudly call this country home.

Along with my friend and former Transy student, Nzinga Donovan ’13, we have founded a nonprofit: Kairos International. The mission of Kairos is to invest in the soul, mind and skills of young adults in developing nations. This January, we launch the program’s inaugural year in Kampala, Uganda, where our students (young adults 18-25 years old) will begin business education courses, vocational skills training and mentorship. Our heart for every student is for their potential to overshadow poverty.

I would be lying if I said my Transylvania experience hasn’t played a huge part in chasing after my dreams. Transy has an undeniable culture centered around finding one’s passion and purpose. Written on the walls and in the hearts of the professors is the encouragement to pave your own way. In many respects, Transy taught me to write my own story instead of following those that walked before me. I was challenged to defend and define my beliefs, strengthening my faith in the process. In hindsight, I recognize that the leadership positions I held as an RA or president of a sorority were less about resume building and more about developing leadership skills and my heart for serving others well.

I returned to campus in April for my five-year class reunion. Walking the grounds, I was flooded with memories of the institution that helped build me into a confident leader, diligent worker and a dream chaser. In the wake of these unfolding dreams, I want to extend a genuine thank you to Transylvania and every individual that works hard to uphold this university. What you do matters, and reaches farther than any of us will ever know.

About the author: Allison Conder ’14 is a co-founder of Kairos International, a Christian nonprofit in Africa.