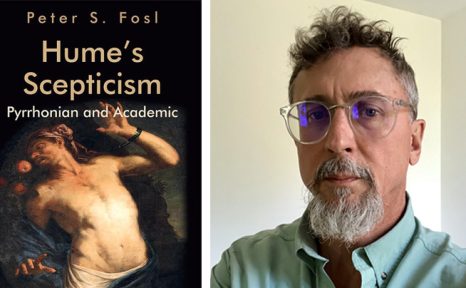 Science raises interesting questions about what we’re able to know. Does it describe only how things appear to us? Or does it describe reality itself?

Peter S. Fosl, a Transylvania University philosophy professor, tackles topics like this in his upcoming book “Hume’s Scepticism.” The work, which Edinburgh University Press will release Nov. 1, has been a long time in the making.

“A lot of things are coming to fruition that I’ve literally been working on for decades,” Fosl said.

David Hume, who lived in Scotland during the 18th century, is regarded by many to be the greatest philosopher of the English language — and one of the most important figures in developing the theories of empiricism and skepticism, Fosl said. By empiricism, he means the importance of grounding our understanding of the world and the self in what we experience. And by skepticism, he means limiting and questioning the project of knowing reality.

For Hume — as well as for science — there is a tension between empiricism and skepticism. In fact, Hume’s radical skepticism calls the whole project of science into question.

However, Fosl said there are scientists who incorporate a skepticism Hume would approve of. They see their own theories, forged through evidence and observations, as the best they have at the moment. And they know full well something better might come along and suspend judgment about whether the current findings of science are finally true.

Fosl’s book provides a history of skepticism — from its origins in ancient Greece through the Enlightenment. Fosl goes on to dig into Hume’s texts to show how they can be understood in terms of skeptical philosophy.

In 2013-14, Fosl spent a sabbatical as the David Hume fellow at the University of Edinburgh, a school Hume attended. “It was really inspiring,” he said. “That was where I really buckled down and just dug into this thing night and day.”

Another of Fosl’s books, “David Hume on God,” came out this past June. He co-edited the work with David Purdie, with the University of Edinburgh’s Institute for Advanced Studies in the Humanities.

Fosl, who earned his Ph.D. from Emory University, also co-wrote a series of toolkits on various philosophical topics and edited “The Big Lebowski and Philosophy: Keeping Your Mind Limber with Abiding Wisdom.”

He’s come a long way in the past 30 years — from subsisting on tea and cheddar cheese while mining Hume’s work as a graduate Fulbright student in Edinburgh, to having a sold-out book release event for “David Hume on God” at the National Library of Scotland this past month.

“It’s a fulfilling moment for me,” Fosl said.