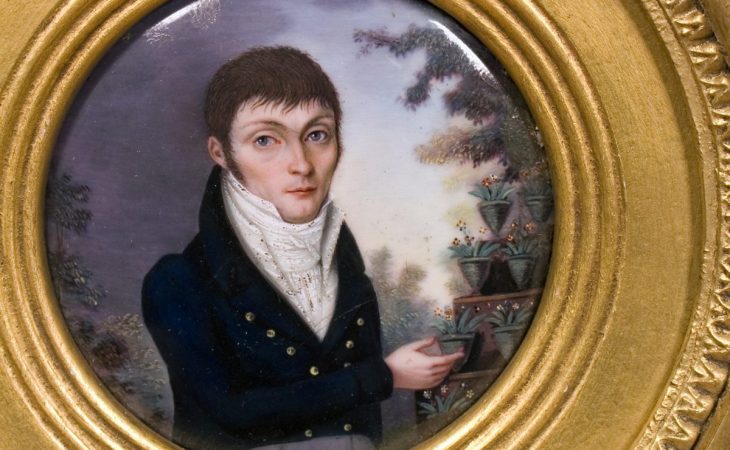 The Transylvania University community delights in the tale of Constantine Samuel Rafinesque — the drama, the curse, the crypt. And with his 236th birthday being today, and this year being the bicentenary of his arrival on campus, let’s take the opportunity to reflect on the ardent, multi-dimensional fellow behind the caricature.

Born in Constantinople and raised in France and Italy, Rafinesque brought his exhaustive interests and global perspective to campus in 1819. His zeal for exploring and documenting the natural world, asking big questions and writing — always writing — represent an all-consuming devotion to his vocation for learning and teaching.

The familiar painted portrait — formal, quiet, restrained — belies what must have been an intensely peripatetic brain and lifestyle. A more apt illustration would suggest a cyclone of curiosity accompanied by a flurry of manuscript pages floating in the wake of constant activity. His output was prodigious. His personal tally was “220 works, pamphlets, essays, and tracts,” according to the “Kentucky Encyclopedia.”

Until his arrival in Lexington, Rafinesque’s lifelong dream of becoming a university professor had eluded him. He had served as secretary to the U.S. consul in Sicily and made a fortune in international trade before losing it all (and many unpublished writings) in a shipwreck off the coast of Connecticut on his way to America.

But even at Transy, because of his lack of formal education, his living depended not on a salary but on paid subscriptions to his lectures. The situation could not have been easy. Perhaps understanding that sense of frustration — of being an outsider (outside of academia and from the other side of the Atlantic), yet confident and driven to achieve — introduces some plausible insight into his infamous conflicts with colleagues.

Nevertheless, his time at Transy was highly productive. As noted in the “Kentucky Encyclopedia,” when Rafinesque left for Philadelphia in 1826, he shipped “forty crates of specimens, which were the basis of his studies for the rest of his life.” The article continues:

“Best known for remarkable fecundity in devising scientific names — 6,700 in botany alone — Rafinesque also had some insight into a number of theoretical issues in biology that became important later: the impermanence of species, the significance of fossils in dating sedimentary geological strata, and such ecological considerations as plant geography and plant succession.”

Rafinesque died in Philadelphia in 1840. And, although fanciful tales still entertain our campus, it is the best of Rafinesque’s spirit — his indefatigable curiosity, utter commitment to vocation and the desire to understand and share what he learned — that also lives on at Transylvania University.

Take a moment to learn more about the unique Rafinesque.