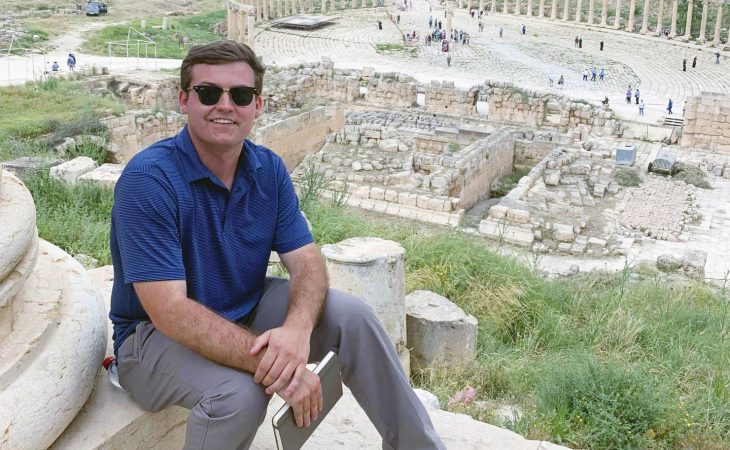 Transylvania helped me to fulfill a dream I have had since I was 12— to travel to Egypt, Israel, and Jordan. I remember my adolescent-self watching movies set there, searching for pictures online, reading and daydreaming about the region. Of course, I never thought it would be a possibility that I would be fortunate enough to go.

Then, my sophomore year, Dr. Russell, professor of history and classics at Transylvania, asked if I would be interested. He along with Dr. Jones, professor emeritus of religion, were planning on traveling to the three countries for a course titled, “A Journey Through the Bible,” and would focus on religious narratives and ancient history, but also on how these ancient religions and cultures interacted in modern times. As a history major, I typically study American history and do the majority of my research in topics surrounding anti-slavery and the American nineteenth century; however, I have always been interested in ancient history, but I had never been exposed to it until studying at Transylvania. To prepare for the trip, I took classes such as the “The Bible” and “Biblical History and Archaeology” with Dr. Jones, and “Arab-Israeli Conflict” with Dr. Cairo, just to name a few.

Finally, in April 2019, I left the United States bound for Cairo, Egypt.

To be honest, it is hard to describe the experience I had during my May Term abroad. I learned more on the ground in Egypt, Israel, and Jordan than I ever could have in a classroom. While Transylvania’s stellar classroom education can provide you with a great deal of knowledge, having biblical sites, Roman ruins, and Egyptian temples as a classroom makes the experience something outstanding. Walking amongst the ruins and seeing the sites we have talked about in classes brought the ancient world to life and provided context that is impossible to fully achieve in the classroom setting.

While my class might have been titled, “A Journey through the Bible,” as a student of political science as well as history, I was able to see more than the ancient history that surrounded me but also was exposed to the people, politics, and culture of these areas in ways that a classroom could never teach. For example, sitting on the banks of the Nile River near Luxor, Egypt, Tipton Alexander ‘20 and I spoke with an Egyptian man about the politics of Egypt and discussed the country’s president, Abdel Fattah el-Sisi, as well as Egypt’s future and role in the Middle East.

As a senior looking back on my time at Transylvania, I have very few regrets. One of them, however, is that I did not study abroad sooner or longer. Although I would not trade my travel course to the Middle East for anything, the opportunities Global Transy provides and the other May Term travel courses, summer, and winter break options are all fascinating. However, my May Term travel course to Egypt, Israel, and Jordan is, to date, the single greatest personal and educational experience of my life.

To Broadway and Beyond is a student-managed blog from the Transylvania Study Abroad program. This article was written by Isaac Settle, a senior majoring in history and political science.