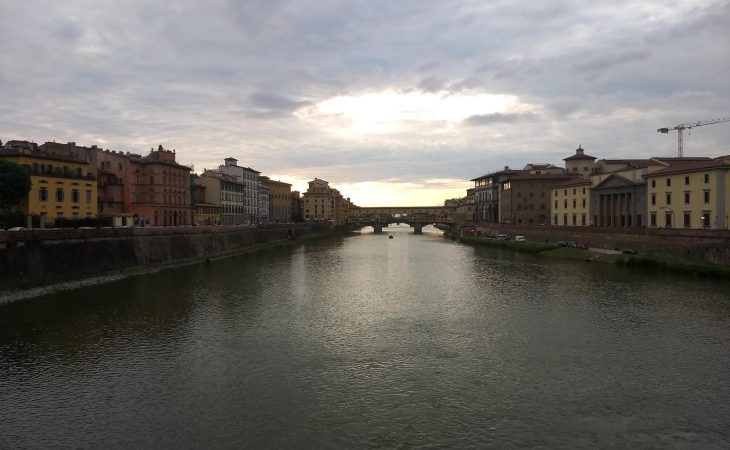 No, not the one in Northern Kentucky. I’m talking about the Florence that is home to wonderful pieces of architecture like the Ponte Vecchio and Florence Cathedral (also known as Il Duomo), pieces of art like the statue of David and Neptune’s fountain, and the workplace to legendary artists like Leonardo da Vinci and Michelangelo.

It was here where I spent a semester abroad studying both WRC subjects like Travel Writing and Ethics in Communication as well as Psychological classes like Culture Shock: The Psychology of Studying Abroad.

This post will be about my first venture outside of Florence. See, in Italy, they have an extremely advanced system of trains and other public transportation, which made it extremely convenient to travel around the country, even if only for a day trip.

I decided to take advantage of this train system to head up to Venice for the legendary Carnevale di Venezia or Carnival of Venice. This is the festival that everyone pictures when they think of Venice, with the famous masks crowding the streets of the floating city.

Now, while this sounds relatively simple, I had to learn quite a bit about the festival. This led to me researching the background of the Carnevale and finding out that the festival had actually been banned from about the 19th century, and only returned when the Italian government decided to start hosting it in 1979.

I also had to figure out what to do while I was there over the weekend. So, I took the only option I really had – I talked to the locals. A woman from the nearby town of Spinea told me of a parade that started in one of the more obscure quarters of the city and marched upon the Doge’s Palace, where all the tourists usually gathered. This was a major boon, as I got to see the parade surrounded by local Venetians and other Italians rather than tourists. It certainly taught me to get out of my comfort zone and that asking how to celebrate another’s culture can lead to much greater benefits than if one simply goes along with the main crowds.

Another thing this trip taught me was the extensive benefits of a public transportation system like the one the Italians have. While it took me a while to get used to purchasing tickets at the train stations, as well as switching trains at certain points (particularly in Bologna, but that’s a story for another time), this truly opened my eyes. While we are so dependent on individual cars in the United States, the public train system that the Italians have is not only more convenient and faster, but it is also more environmentally friendly. It honestly makes me wish for such a system here in the US, as it would make long range travel much cheaper and quicker.

Below are just a few of the many pictures I took while in the famous city during my time there. The left is the traditional Venetian city state flag flying in front of a church. The middle is a foggy picture of the Church of San Giorgio Maggiore in the distance. And the right picture is of three Venetian women in traditional Carnevale costumes and masks.

To Broadway and Beyond is a student-managed blog from the Transylvania Study Abroad program. This article was written by Will Campbell, a senior majoring in psychology. Campbell is a member of the Pioneers soccer team.