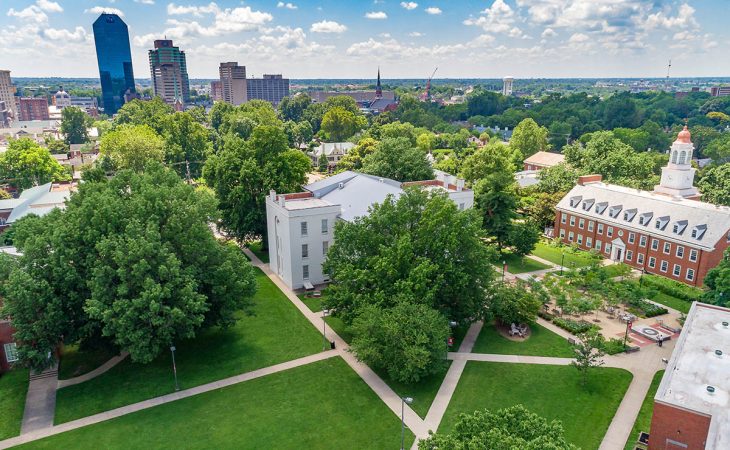 In a new rating that spotlights schools for advancing the social mobility of their students, U.S. News & World Report ranks Transylvania University 50th among the nation’s liberal arts colleges.

The Top Performers on Social Mobility list considers how well Transylvania graduates students receiving Pell Grants; the vast majority of these funds are awarded to students with adjusted gross family incomes of less than $50,000. It was one of several recognitions from U.S. News earlier this month — the university also landed on the Best Value Schools list and, overall, moved up 15 spots in the past two years to 72nd among the country’s liberal arts schools.

For the Social Mobility ranking, U.S. News considered the six-year graduation rates of Pell Grant students. Of Transylvania’s students who started in 2012, 73.3% of those receiving this federal money have graduated, compared to 75.8% of the overall student body. “There’s a little bit of a difference,” said Rhyan Conyers, vice president for institutional effectiveness. “But it’s really not that substantial, which speaks very well of what we have going on here.”

According to a recent Brookings Institution report, the average six-year graduation rate for Pell Grant recipients in a sample of 1,266 four-year colleges was 51.4%, compared to 59.2% for those not receiving Pells.

Transylvania takes extra steps to help ensure its students earn their degree — and in a timely manner. For instance, staff members come up with intervention strategies for those who are having academic troubles or don’t seem engaged in other ways. The school also offers free help with coursework, including assistance from peer tutors who are recommend by faculty.

“Because we’re a campus of about 1,000, it’s easier for us to provide individual attention,” Conyers said. “There’s a good chance someone in the registrar’s office is going to know that a student has a scheduling problem — or financial aid is going to know a great deal of detail about a student’s financial challenges.”

Between 20-25% of Transylvania students receive Pell Grants; that’s about the same percentage as those who are first-generation college students. Conyers said this means they don’t feel like they’re in a small minority, as they would at some other schools. Many of their fellow students come from similar backgrounds, so they might feel less alienated. “I think it does make things easier,” he said.

[S]ome colleges are more successful than others at advancing social mobility by enrolling and graduating large proportions of disadvantaged students awarded with Pell Grants.”

The university also pays special attention to those who are the first in their family to attend college. The John E. Fryer ’57 Fund for Diversity and Inclusion, for example, provides support for first-generation students.

Pells are one of many grant and scholarship opportunities Transylvania students can use to make a college degree more attainable, cut down on debt burden and help their families save money. “We’re trying to piece together all these funding sources to make it as affordable as it can possibly be,” Conyers said.

In fact, more than 98% of the university’s students qualify for some sort of financial aid they don’t have to pay back.

Spanish professor Jeremy Paden is a testament to the benefits of financial assistance. “I went to college on a mix of scholarships, Pell Grants and government subsidized loans,” he said. “Though my dad was a doctor, because he was a medical missionary in the developing world, our family’s income was below federal poverty guidelines. Without Pell Grants, my debt load would have been double what it was. Whether or not the prospects of that much debt would have kept me from college, I don’t know. But without Pell Grants and without the government subsidized loans, I certainly would not have had the freedom to continue with postgraduate education.”