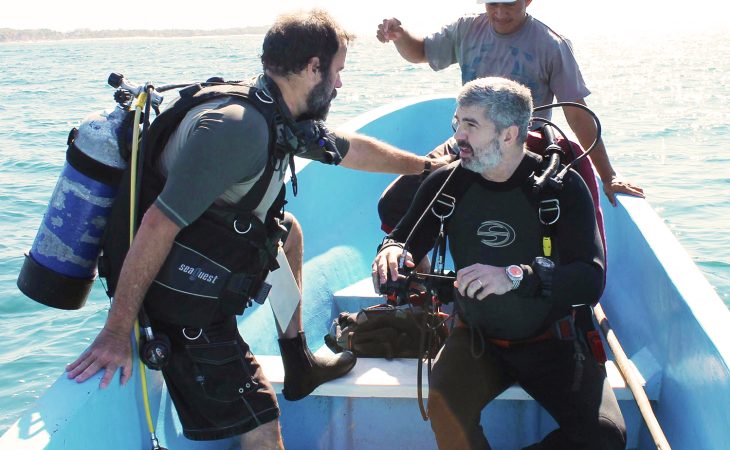 Previously known only to a few fishermen, a shipwreck lies under 35 feet of murky water just off the Pacific coast of El Salvador.

The circumstances behind the wreckage — what kind of ship it was, when it sank and what it was carrying — made for an underwater mystery until Transylvania University professor Chris Begley ’88 and his colleague Roberto Gallardo braved the intense, washing-machine-like currents and surges to investigate the site.

After some initial dives, Gallardo invited the Transylvania anthropology professor to look at the site a few years ago. (Begley and Gallardo, who is with El Salvador’s Guzmán National Anthropology Museum, had previously worked together back when Begley was grad student at the University of Chicago.) The two dove down to the wreckage and discovered pottery from the 1850s and a piece of textile from a blue, woolen garment — perhaps a maid’s uniform.

“Much of the site was buried in sand, and visibility was just awful — which it often is in the Pacific,” Begley said. “It was very hard to get a sense of what you were looking at.”

Conditions at the site improved somewhat when they revisited the wreck this past winter while Begley was on sabbatical. A hurricane had blown through in the interim and shifted sand that had been covering a lot of the cargo. This time Begley and Gallardo — along with the British ambassador to El Salvador and his wife — found and mapped large, iron water pipes and lead ingots, which would have been used to seal the pipes. “This was all very exciting,” Begley said. It was, in fact, one of the first investigations of a shipwreck in El Salvador.

A big reason for his excitement is that the 1850s cargo told him something about El Salvador after it had recently gained its independence from Spain. It provided hints to questions like: “How were they identifying themselves, what were they using to create their identity, how where they presenting themselves, what were they buying, consuming,” Begley said. For instance, the English Staffordshire ware ceramics they found would have been fancy for the time, but the article of clothing, not so much.

In addition to the transition from colonialism to independence in Central America, this was the dawn of the Industrial Age in the Americas. And the cargo of the ship was largely industrial — pipes, cables and chains, maybe for a water system or other construction projects.

The lead ingots were stamped by a smelting works in Runcorn, England, near Liverpool, where Begley believes the ship left from. He thinks the vessel — measuring about 150 feet long and 30-40 feet wide — sailed around the tip of South America and was headed north. It wouldn’t have been carrying an industrial cargo from the north, because there wasn’t yet heavy industry on the West Coast. There was, however, a gold rush going on in California. That’s why when National Geographic TV called Begley to talk about his other work in Honduras and the topic of this shipwreck came up, so did the question: “Is this carrying gold?” Nope. Headed the wrong way.

The next part of the investigation was to pore over historical documents. The big break came when Gallardo found a newspaper article from mid 1851 — A wooden, brigantine ship named the Thetis had been sailing from Liverpool when it sank in the vicinity of what is now the wreckage site after dropping off part of its cargo in Nicaragua. It was headed to ports in El Salvador and Guatemala when it likely encountered a strong current in an area with numerous sand bars less than a mile from shore. Begley thinks it struck a sand bar, broke open and filled with water while the crew — all of whom survived — tried to save as much cargo as possible. (The newspaper said they managed to haul off some sacks, but didn’t go into detail.)

Begley and Gallardo shared their work on the site in El Salvador and in the U.S. at a conference of the Society for Historical Archaeology. They also Skyped about it with a Lexington, Kentucky, elementary school classroom.

They plan to one day return to the shipwreck. But their next work in El Salvador may be a much more ambitious adventure: locating two of conquistador Pedro de Alvarado’s ships from 1534.