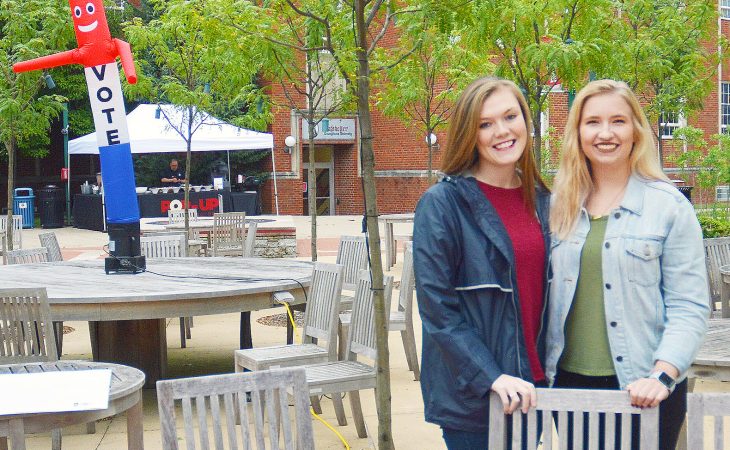 More than three-quarters of all Transylvania University’s students are registered to vote, and a new study shows more of them are exercising their right to do so.

The National Study of Learning, Voting, and Engagement (NSLVE) recently released a report conducted by the Institute for Democracy and Higher Education at Tufts University’s Tisch College of Civic Life. The report shows that, nationwide, the 2018 voting rates at participating college campuses doubled to 39% on average compared to the previous 2014 midterm. In Transy’s case, overall student voting participation rose from 27.4% in 2014 to 38.3% in 2018.

What’s more noteworthy is the increase during that same time in voting participation among the number of students on Transy’s campus who were registered. That number increased from 33.5% in the 2014 midterm elections to 48.9% in 2018.

Savannah Lambert is a Transy junior who helped organize a “When We All Vote” voter registration booth on campus last year before the 2018 midterm elections. Lambert says she’s proud to see voter engagement numbers at Transylvania increase.

“Historically, college students have had one of the lowest voter turnout rates, but we’re seeing that begin to shift,” Lambert said. “It’s so important to make sure that college students, especially those who need to vote absentee from a different county or state, are aware of the processes and deadlines associated with that.”

Lambert says she hopes voter participation continues to increase. “I know that we have a passionate and engaged student body ready to make a positive change.”

The NSLVE report is just one recent recognition of Transylvania’s student engagement at the national level. Earlier this year the Washington Monthly magazine ranked Transylvania University as one of the top 10 liberal arts colleges in the nation for promoting public service, in part because of the school’s increasing voter engagement.