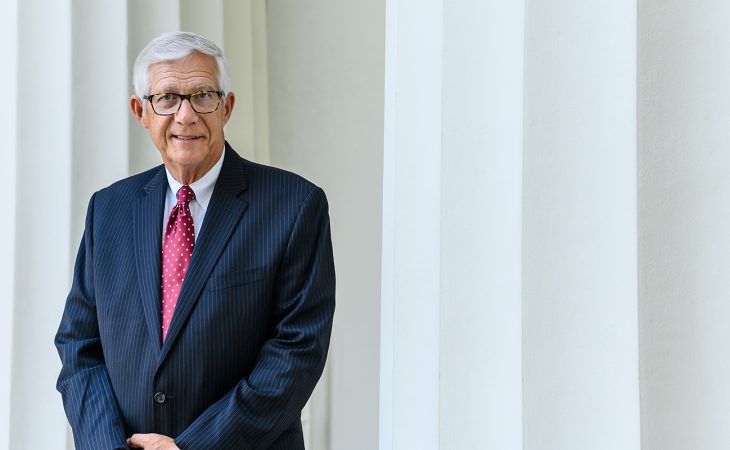 He can’t say whether he liked Ike’s speech. He was only 2, after all.

But the story does highlight how deeply ingrained the school has been in his life since the beginning.

Williams is Transylvania’s new interim president. He also serves on the Board of Trustees and graduated from the university in 1974, as did his wife, Lucy. His parents — also Transy graduates — enrolled him when he was a toddler.

So it’s no surprise the transition to his new role seemed so natural during a recent faculty and staff meeting in Carrick Theater. Williams, who as a student worked technical theater on the very stage where he kicked off the meeting, joked about helping out if anything went wrong with the audio-visual equipment. And when the choir director asked him if he’d be in this year’s faculty and staff holiday concert, the former Transy choir member didn’t miss a beat: “Sign me up,” he said.

Williams’ enthusiasm carries over to his leadership role. “As the interim president I’m not going to be warming the seat,” he said.

For instance, he looks forward to being an ardent spokesperson for the university, and he plans to participate in an upcoming Symposium on Postsecondary Education Trusteeship.

Williams also enjoys being back on campus. “It’s very energizing,” he said, specifically mentioning the ongoing, significant enhancements to campus — from the new residence halls to the Campus Center project to the Carpenter Academic Center renovations.

“When I was a student here, buildings were kind of secondary,” he said. “Students today and their parents are looking for a higher level of accoutrements; I have been in the new dorms, and they are just fantastic.”

Actually, much of the academic side of campus was new when Williams was a student — including Brown Science Center, where the biology major worked in a chemical stockroom and took The History of Science with professor Leland Brown, whom the building is named after.

Williams went on to earn his Doctor of Dental Medicine and a Master of Business Administration from the University of Louisville. His college administration roles included serving as assistant provost and dean at Indiana University, the University of North Carolina and U of L. Additionally, he was chair of the Commission on Dental Accreditation — and chair of the group’s Predoctoral Review Committee, which oversees accreditation policy for all D.D.S. and D.M.D. educational programs in the United States. In fact, Williams is nationally and internationally known for his work in accreditation, academic program development and assessment.

His dentistry background serves him well as university president. (Note the president of Lexington’s other major university is a D.M.D.) “Dentists are very astute diagnosticians,” Williams said. “We are well-educated and well-trained to look at things in excruciating detail. I’ve had people say, ‘How did you notice that — we’ve been doing the same thing for the last five or 10 years and nobody has said that.'” Basically, they examine the details of a situation and then come up with a treatment plan.

Both dentists and administrators emphasize routine checkups and prevention — keeping cavities in check by having you brush your teeth, and keeping student debt in check by making sure you’re equipped with a solid education through the right curricular offerings, close faculty-student interaction and the support of a healthy university endowment. “The costs are real,” Williams said. “We’ve got to be diligent about looking at our expense side and not creating a huge amount of debt burden for our students and families.”

For his commitment to supporting Transylvania students and their liberal arts education, both Williams and his wife in 2009 received the Morrison Medallion, the highest honor presented by the Transylvania Alumni Board each year to graduates.

Williams took over his new leadership role from Seamus Carey, who now is president of Iona College in New York.

Looking to the future, to a time when his office no longer overlooks the campus where he and his parents listened to Eisenhower during the 1954 dedication of the school’s new library, Williams sees himself cruising along the waterways of the Eastern United States in his 40-foot Mainship. He and his wife plan to resume their self-guided boat tour from the Great Lakes to the Gulf of Mexico, which they cut short when he was named interim president.

Williams said that when he’s boating he draws from his skills as a navigator — “which is also very effective for administrators, to take us from point A to point B.”