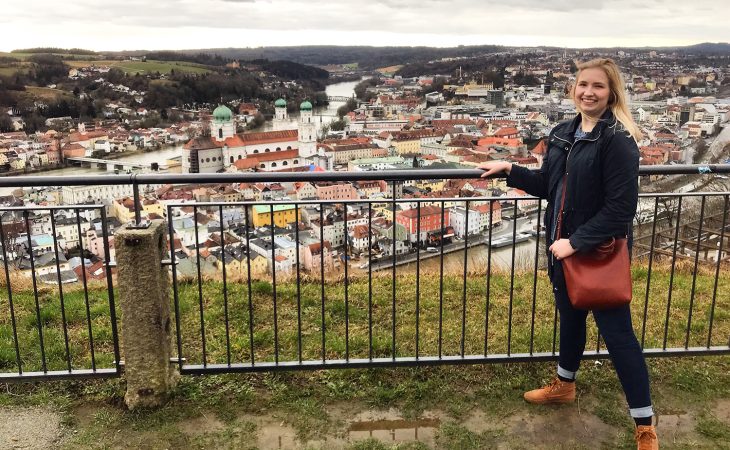 Earlier this year Savannah Lambert found herself in a medieval Bavarian city acting in a play about a hapless princess — and neither she nor her fellow performers were German, the language they were speaking on stage.

The show capped off a semester at the Universität Regensburg through the Kentucky Institute for International Studies (KIIS) Germany Spring Semester program. It was one of may immersive experiences that strengthened the Transylvania University junior’s already impressive language skills (possibly even her proficiency as a percussionist, as she also provided musical accompaniment with a triangle for the play).

“It just really makes a difference for you when you’re living and breathing a language 24/7, versus when it’s six hours of classes a week,” Lambert said. “Having to adapt to another culture really opens your eyes and makes you a more tolerant and well-rounded person.”

Her overseas experiences have also made her a passionate spokesperson about international education — she recently began as a study abroad peer ambassador at Transy, promoting the school’s Global and Intercultural Engagement programs and advising fellow students. Additionally, Lambert just started a yearlong internship doing social media and marketing for the U.S. Department of State’s Virtual Student Federal Service. After college, her dream is to land a State Department job, or somehow go into public policy or diplomacy. She’s majoring in German and international affairs and minoring in French.

Before she started college, it was through the State Department’s Congress-Bundestag Youth Exchange that she received funding to stay with a host family and study in Germany for a year after high school. “I learned so much of the language that I wanted to keep going,” she said.

As for the culture, she said she appreciates how open Germans are, prioritizing clear and concise communication. She also likes the food and architecture. “One of the things I was most surprised by when I got over there was just how old everything is. There’s just so much history in the streets that you walk every day.”

During her time in the KIIS program, she traveled through the southern part of the country and got a glimpse of how regionally different Germany is. KIIS also featured a four-week intensive language course, which helped her fine-tune her grammar skills. And to broaden her experiences, she took classes with students from around the world and traveled elsewhere in Europe during spring break.

To help make her trip happen, German professor Matthew Bauman tipped her off about funding through the Delta Phi Alpha National German Honor Society, which went toward things like airfare, day-to-day expenses and textbooks.

KIIS and Transy work together so that 100 percent of students’ award money and federal and state aid can go toward the cost of the program. “I wasn’t paying any of the additional tuition,” Lambert said. “In terms of cost, it wasn’t any more expensive for me to be in Germany. It definitely would not have been possible for me to spend a whole semester abroad if it weren’t for the agreement that we have set up with that program.”

Courtney Smith, Transylvania’s director of Global and Intercultural Engagement, said the “KIIS Germany program is one of our 30 GlobalTransy offerings and is a wonderful experience for our students majoring or minoring in German. Students return from Regensburg raving about their experience.”

Lambert urged students to study internationally through her school. “A lot of people really don’t realize the amazing study abroad programs Transy has to offer,” she said. “For me study abroad definitely solidified my career choices and my course of study — but it also made me a much more independent and confident person in my day-to-day life.”