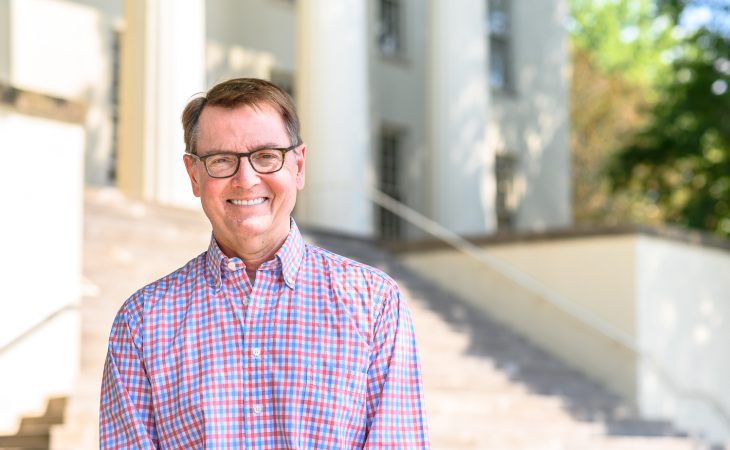 Former Lexington Mayor Jim Gray will deliver the keynote address during Transylvania University’s Academic Convocation at 4:30 p.m. Thursday in Haggin Auditorium. The annual ceremony, which helps kick off each new school year, also will include a student awards presentation.

Gray will draw from chapters of his own life — as well as the experiences of people he’s close to — when he speaks on this year’s campus theme of resilience.

Along those lines, Gray noted how the university itself has endured as an institution for almost 240 years — and how it’s an asset to the community he served as mayor for two terms. “I always think of Transylvania as a real treasure for our city.”

He said being invited to speak at the convocation is “an honor and a privilege — and it inspires humility.”

Gray, who lives across Third Street from the school in the Gratz Park neighborhood, has strong personal ties to the school. His late mother, Lois Howard Gray, graduated in 1940. She was Miss Transylvania that year and later served on the university’s Alumni Board and was on the Board of Trustees for 22 years. Also, in 1997 she received the Morrison Medallion, the school’s highest alumni award.

As Lexington’s mayor from 2011-19, Gray led the city through an era of growth and creativity while drawing from both his love for the region and his experience as CEO of Gray Construction. The international design-build firm is one of the country’s largest builders of major manufacturing, distribution, automotive and food and beverage facilities.

Gray’s accomplishments as mayor include reducing the city’s annual health insurance costs while improving employee satisfaction through an on-site medical clinic and pharmacy. He also preserved the retirements of more than 1,000 emergency workers, hired more police officers and replaced outdated equipment. Additionally, Gray worked to drive growth in high-paying sectors through the city’s first job-creation fund and attracted private investment to make Lexington the nation’s largest gigabit city through the creation of a fiber-optic network.

Also when he was mayor, Gray delivered Transylvania’s 2016 commencement address.

His convocation speech is one of many events this academic year focusing on resilience. Others include our New Frontiers and Creative Intelligence series, as well as Morlan Gallery exhibitions and Transylvania Theater productions.