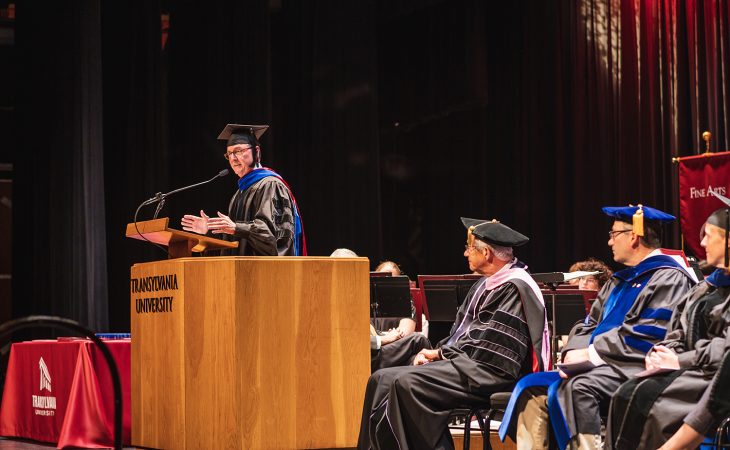 Former Lexington Mayor Jim Gray on Thursday drew from his personal and political experiences when he spoke at Transylvania University’s Academic Convocation on the 2019-20 campus theme of resilience.

The annual ceremony — which includes a student awards presentation — kicks off the academic year.

“I appreciate the students, faculty and the entire Transy community for taking on the subject of resilience this year,” Gray said. “In a changing and unpredictable world, resilience is a quality we need to do all we can to cultivate — in ourselves and in our communities.”

Gray, who lives across Third Street from the school in the Gratz Park neighborhood, has strong personal ties to the university. His late mother, Lois Howard Gray, graduated in 1940. She was Miss Transylvania that year and later served on the university’s Alumni Board and was on the Board of Trustees for 22 years. Also, in 1997 she received the Morrison Medallion, the school’s highest alumni award.

Two-term mayor Jim Gray ran for public office six times, winning three times — a batting average of .500. “You win some, lose some,” he said. “But like in business and sports and life, you’ve gotta be willing to swing at the ball.”

Gray said winning is more fun, of course. “You actually get to do public policy, and if you have a vision you get to work hard to implement it. But there were valuable experiences in the losses too. And one of them was that I could endure loss: the disappointment and the frustration, the public nature of asking for the votes of your fellow citizens and having a majority of them choose another candidate. And that whole process is public.”

In 2010 Gray became Kentucky’s first openly gay mayor. During his convocation address to students, faculty, staff and Lexington community members, he talked about how he felt like he had to keep that aspect of his life private for a long time — and about the challenges of making it public.

So how do you develop strength and resilience? “There’s really no perfect formula or template,” said Gray, who is chairman of the board of Gray Construction. “It’s a personal journey, and if we’re lucky and living, we’re always encountering the next chapter of challenge and its corollary resilience.”

He concluded by saying, “The energy you invest in developing your own resilience is remarkably worthwhile – and it will pay off in many ways – in surprising ways – including the predictable chance that your resilience will inspire others to find resilience and growth in themselves.”

Michael Cairo, interim vice president for academic affairs and dean of the university, also spoke during Thursday’s event. “Academic Convocation is a very special occasion at Transylvania University,” he said. “This ceremony is a time to renew our commitment to lifelong learning, gives us an opportunity to focus on the journey before us and allows us to reflect on what we strive to achieve during this year. Most importantly, this is a time to come together as a community to affirm our mission and the values of a liberal education in today’s complex and global society.”

Cairo also noted how convocation is a chance to celebrate Transylvania’s successes through the presentation of university awards to outstanding students.

Beginning in 2001 the dean has selected an artwork from Morlan Gallery’s Juried Student Exhibition to purchase and add to the university’s permanent collection. This artwork is chosen by the dean, faculty jurors and the Morlan Gallery director for its superior creative and technical accomplishment.

The Thomas Jefferson Scholarship is awarded to a history and/or political science major with aspirations of attending law school upon graduation.

The Stephen Austin Award is conferred upon first-year students who have completed at least four course units as full-time students and have the highest cumulative grade point average in courses taken at Transylvania.

The Henry Clay Award is conferred upon sophomores who have completed at least 12 course units as full-time students and have the highest cumulative grade point average in courses taken at Transylvania.

The Junior Class Award is conferred upon juniors who have completed at least 12 course units as full-time students and have the highest cumulative grade point average in courses taken at Transylvania.

The American Chemical Society and the Joint Polymer Education Committee present this award to a chemistry major whose future plans include a career in chemistry, biochemistry or chemical engineering. The award recognizes outstanding performance in the first two semesters of organic chemistry.

The Charles and Susan Shearer Scholarship is awarded annually to seniors who have achieved outstanding academic records and have made significant contributions to Transylvania.