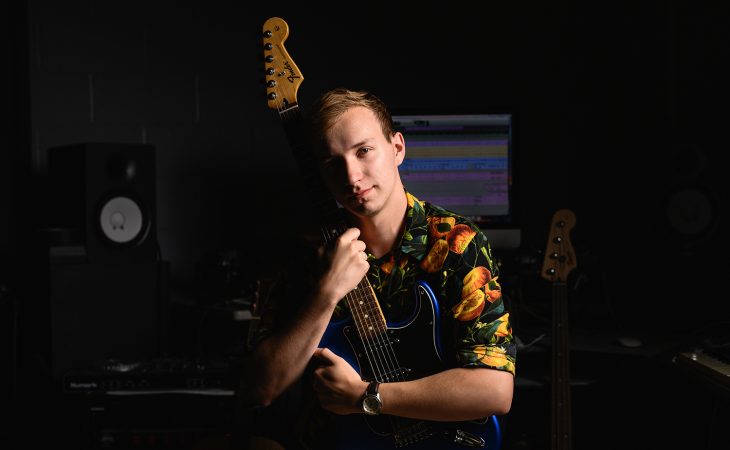 A benefit of attending a tight-knit school like Transylvania University is the encouragement students get from their classmates — the kind of support that can even inspire them to discover hidden talents.

Becoming a musician once seemed rather unlikely for him. Back when Lamb was a junior in high school he got a guitar for Christmas, but because it was so frustrating to learn, he didn’t bother with it for years.

Also, one day he started singing and someone said: “I didn’t know you could do that.”

“I didn’t know I could do that,” Lamb responded.

Thanks to the prompting and examples set by his fellow students — in addition to a music class, access to the school’s recording technology and learning the guitar — Lamb used his newfound skills to record an EP of four original songs, which have been streamed nearly 3,000 times on Spotify, Apple Music and elsewhere.

Lamb, who has another EP in the works, said the music on “Better Half” is “singer-songwriter type stuff. It’s on the sadder side of things. I’m a sucker for some sad music.” That particular emotion in music really connects to people, he said.

“I didn’t think I’d be doing that here at college as a computer science major,” Lamb said. “It’s all about learning something new, and it doesn’t always have to be in a class.”

Besides being complimented on his vocals, Lamb found encouragement from his friend Jenna Soderling ’19, a music technology major who also released tunes on Spotify “pretty much all on her own,” he said. “I’m always seeing my friends doing amazing things. You meet some amazing people here.”

So Lamb, who had learned recording basics in an Introduction to Music Technology class, was inspired to grab his guitar, watch some instructional YouTube videos and spend this past summer recording his EP in the school’s Digital Arts Technology Lab.

The DArt Lab — with its recording equipment and software — is free for students to use for projects that otherwise would cost a lot of money. Through its Digital Liberal Arts initiative, the university provides spaces and equipment for students to use technology across a wide range of disciplines. The DLA initiative also is co-sponsoring the upcoming Studio 300 Digital Art and Music Festival, which Lamb’s Interactive Music and Multimedia class is taking part in. (Lamb is a digital arts and media minor.)

Exploration and creativity are integral to the Oct. 3-4 music festival — as they are in a larger sense to Transylvania’s liberal arts mission.

“Everyone at Transy is willing to learn something new or try something new,” Lamb said. “You meet some amazing people here. They just turned around my perspective an encouraged me to push it further.”