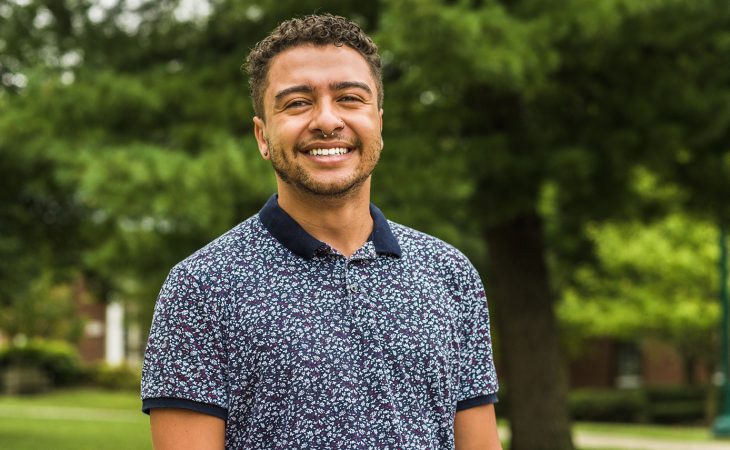 A recent Transylvania University grad wrote her name on the seat of a chair in Tevin Monroe’s office — along with the words “AWARE — youth crisis advocate: Juneau, AK.”

Monroe hopes the chair — emblazoned with the seal of the AmeriCorps national service organization — will someday have as many comments as a high school senior’s yearbook. He’s starting a tradition: Transy students planning to go off for a year of service work will note where they’re going on the “AmeriChair.”

A former AmeriCorps VISTA member at Transylvania himself, Monroe is the school’s new coordinator of civic engagement.

His new role is similar to the one he’d been filling as a VISTA for the past year: He works with local organizations and students on volunteer teams and in community-based Federal Work-Study programs. In doing so he provides the dual benefit of supplying nonprofits with volunteers, and students with service, leadership and job opportunities.

Monroe was introduced to volunteer work at Detroit’s Wayne State University, where he earned a Bachelor’s of Science in nutrition and public health.

He twice participated in the school’s Alternative Spring Break community engagement projects, which included working in local urban gardens and a nonprofit called Auntie Na’s House, where a woman named Auntie Na provides people with shelter, food and other necessities.

That alternative break taught him to feel more empathetic, non-judgmental and comfortable interacting with Detroit residents he otherwise wouldn’t have gotten a chance to meet. “That experience is what taught me the most about the city,” he said.

That experience also was the impetus for Transylvania’s first Alternative Break in Lexington at the end of the school year. The weeklong program focused on themes of food justice, immigration and community development in partnership with local nonprofits. “We wanted to give students a holistic experience of the city they live in,” Monroe said.

Earlier this month, Monroe and another former Transy VISTA member, Margaux Crider, were recognized with an American Civic Collaboration Awards honorable mention for this past May’s Alternative Break. The honor coincided with the Washington Monthly ranking Transylvania among the nation’s top 10 liberal arts colleges for promoting public service.

Going forward, Monroe looks to work with faculty to increase service learning components in academic coursework. His first public engagement work back at Wayne State, after all, was required for a class. For him, having that class requirement was the nudge needed to learn what kind of impact he could make in a community.

Now Monroe has found his niche — his way of facing a world that can be frustrating because some people are left behind, marginalized, caught up in cycles of generational poverty.

He’s arrived at a mental place where he can say, “I have to do something about this — I can’t let it happen in my neighborhood and not be an active citizen.”

Of all the ways to go about that — from politics to running a nonprofit — Monroe has chosen to promote civic engagement at a university. “That just seems like the best use of my talents and abilities,” he said. “Not everyone can do everything, but everyone can do something. This is the something that I figured I can do.”