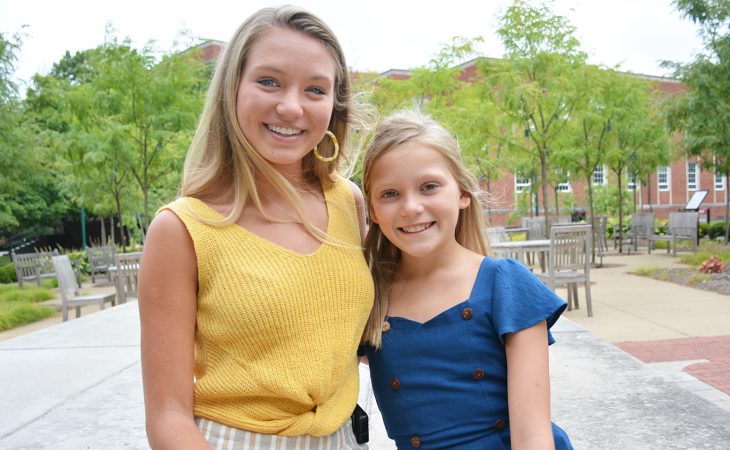 Back when Lauren Kiser was 6 years old, she was diagnosed with Type 1 diabetes — and was a little scared.

To help her feel better, a girl from her neighborhood would stop by her house with food that Lauren could safely eat.

Now a sophomore at Transylvania University, Lauren is paying it forward.

She is mentoring a sixth grader who also has Type 1 diabetes — and through state and county fair pageants she’s raising awareness about the disorder, which is associated with insulin deficiency.

Both Lauren and the girl — Aubrey — drove in from their hometown of Frankfort earlier this week to visit Transylvania’s campus and talk about their special bond.

“She’s ended up inspiring me just as much as I’ve given her help,” Lauren said. “She’s one of the strongest people I’ve ever met.”

The admiration is mutual. Aubrey said Lauren (who also is her babysitter) has helped her understand her condition and provided support. “Lauren has told me not be scared — and inspired me.”

Lauren said we all have something that challenges us in life. “It’s just whether or not you let it control you — or dictate what you do. That determines how strong of a person you are.”

“Diabetes has made me stronger,” Aubrey said. “And I have learned not to be ashamed of it.”

Lauren noted how Aubrey’s confidence has never faltered. “She has always just been awesome — she hasn’t let it keep her from doing anything.”

Aubrey was her “little sister” in the Distinguished Young Women of Frankfort scholarship program, which Lauren won last year. “We spent a lot of time preparing for that together.”

Lauren also on Tuesday won the title of Miss Boone County and in January is headed to the Kentucky State Fair pageant, which she has competed in twice before.

During pageants she discusses Type 1 diabetes on stage and in interviews. Educating people about the condition has become her platform, as has increasing awareness about mental health issues.

Lauren also recently was the local winner of the Franklin County Fair pageant. (Since it was open to competitors from outside the county, there was a local and an overall winner, who goes on to the State Fair.)

At Transylvania, Lauren is majoring in biology and minoring in French. She hopes to go on to medical school and eventually become a pediatric endocrinologist (like her own doctor, who has made a positive impact on her life). Lauren also is a member of the school’s swim team and French Club.

Sometime soon she may organize a fundraiser at school — like ones she’s been involved in since she was a young girl. She’s thinking about doing a walk that involves her Delta Delta Delta sorority.

Additionally, she and Aubrey plan to participate in a Juvenile Diabetes Research Association walk in October.

This duo isn’t totally focused on Type 1 diabetes, though.

“Most of the time we just go to the pool … and cook food,” Lauren said. That’s not all. “We make slime all the time.”