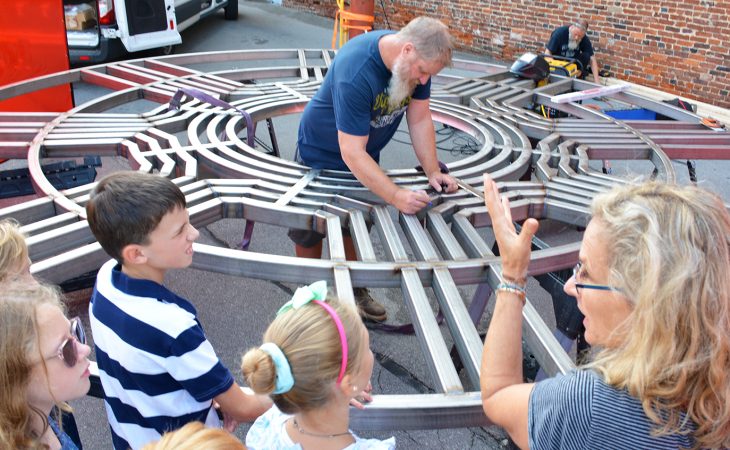 For the past three years, Transylvania University professors Kurt Gohde and Kremena Todorova have been spreading a message: Unlearn Fear + Hate.

After this weekend, that message will be hard to miss.

It will hang above downtown Lexington on a stainless steel halo measuring 23 feet across and weighing more than a ton.

The professors’ Unlearn Fear + Hate public art project is already a familiar sight to many Lexingtonians. Similar halos with that phrase in various languages have been displayed around town — from libraries to the UK Gatton Student Center. The message has been stenciled on roads and sidewalks, and it was part of a community project that turned coloring pages into gilded illuminations. #UnlearnFearAndHate also spreads on social media because people are encouraged to take and share selfies with their heads inside the halo.

The words inscribed on the piece come from a poem by Frank X Walker, Kentucky’s first African American poet laureate.

Making the halo a prominent downtown fixture will both amplify and refresh the message. “There are so many people who will see it who have never had any awareness of Unlearn Fear + Hate, so the conservation will become new again,” Gohde said.

Workers are installing the halo on a nine-story office building at 201 W. Short Street. They’ve turned a corner of a nearby parking lot into a temporary studio to weld together the artwork; it arrived Wednesday in pieces because it’s too large to have been shipped whole from the local Prometheus Bronze Foundry & Custom Metal Fabrication, which made the halo. Lights will eventually illuminate the piece at night.

People will still be able to appear inside the halo in photos — it’ll be a matter of getting the perspective right, and they’ll have to get someone else to take the picture because of the distance.

The project is being funded in part through the National Endowment for the Arts and Blue Grass Community Foundation. LexArts helped secure the grants and has been involved with the project management.

“LexArts has been thrilled to be able to help with this final, permanent part of a communitywide project,” said Ellen A. “Nan” Plummer, LexArts’ president and CEO. “Kurt and Kremena responded to Lexington’s need to express our true values in our most significant public space. Frank X Walker’s words inscribed in this stunning sculpture will be a kind of benediction over us — reminding us of our ability and responsibility to heal our divisions.”

The first version of the halo was attached to the 21c Museum Hotel Lexington in 2016. It faced the Courthouse Plaza to become part of the conversation about a Confederate monument there. The statue has since been relocated along with another one that stood nearby.

The halo also is part of an effort to bring sculptures back into that downtown space, activating the voices of people who live in Lexington today.

It’s no coincidence the artists are installing the new halo as close as possible to the Courthouse Plaza and Cheapside Park, once the site of a slave auction. During the work’s formal unveiling — Gohde isn’t yet sure when this will be — participants in a witnessing circle will read the names, stories and bills of sale of people sold into slavery at Cheapside as a way to bring personhood back to them, he said.

The goal of Unlearn Fear + Hate is to encourage people with differing beliefs to recognize each other’s humanity, Gohde said. That stems from the original effort to engage in the Confederate statue conversation.

“Both sides were so firmly committed that, rather than having a conservation to allow them to hear each other, they just left more distant,” Gohde said. “In so many ways, that’s what Unlearn Fear + Hate has been about: How can we bring people with those different beliefs of any form — whether political or social — together and cause them to leave if not in agreement at least not more distant from one another.”