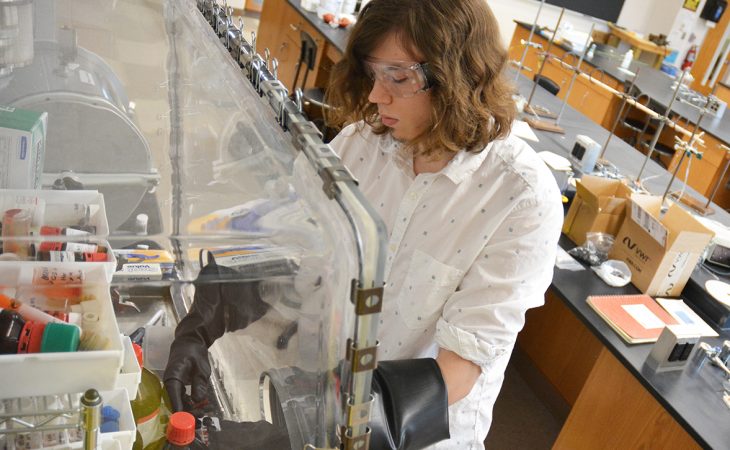 In April of his senior year, Collan Henderson ’19 could have chosen to rest on his laurels. The recipient of an American Institute of Chemists Award at Transylvania University, he’d already secured a full ride and stipend to pursue a Ph.D. in chemistry at the University of Kentucky. One professor had even suggested he take the summer off before beginning the next leg of his journey.

But Henderson was much too interested in synthesizing carbon quantum dots to simply idle in anticipation. “There’s not anything I’d rather be doing,” he acknowledges. “I tend to get really into things.” So, after completing his senior exams, he jumped right into the lab at UK.

“The research I started at Transy is pretty much what I’ll continue to do,” he says of his chosen field. “Quantum dots, nano materials, are useful for their optical properties,” he explains. “There are lots applications — from QLED televisions and solar cells to bio-imaging.”

He likes the vastness of the uncharted territory — perfect for a Pioneer.

“It’s really a new and emerging field,” Henderson says. “There is so much to be done in every direction, and tons of new stuff to be discovered.”

Part of what drives him is discovery — and “a real interest and curiosity.” Even in elementary school, Henderson was intrigued by science. Chemistry took the lead in high school. He liked its ability to explain the “properties of things, how things work from an anatomic, elemental perspective,” he reflects. “It’s always just really fascinating — how things work from a very small perspective.”

Henderson is a Trimble County, Kentucky, native whose mother is a professor at Union College. He had read that Transy “had the best chemistry program” — his decision to attend “was pretty straight forward.”

At Transy he found the opportunities to discover what really drives his interest. He gained first-hand research and presentation experience and the broader liberal arts context that expanded his perspective.

“Getting with professor [Kyle] Schnitzenbaumer has been really great,” Henderson says, recounting how he simply walked into his teacher’s office at the end of his sophomore year and asked if he had any research opportunities. “It’s really rare to have a liberal arts professor who’s doing nano material research,” he notes. The assistant professor of chemistry said “yes” and invited him to work on his project. “That’s how I got into it,” Henderson says. “I really fell in love with it after that summer.”

From that time on, he worked continuously on quantum dots, conducting part-time research during his junior and senior years and working on projects in classes of five students. He marvels at the “individual aspect of it,” the access and close working relationship with his professor. “That helped a lot,” he says, recalling how easy it was to receive guidance and troubleshoot problems. With his peers, he presented research at industry gatherings — last year in Orlando and the previous year in New Orleans.

“It’s a really great experience,” he says of participating in poster presentations and talking with Ph.D.s, postdocs and professors who are pursuing and presenting research in the field. Returning from New Orleans, he knew that quantum dot research would be his direction, “just seeing all the different things going on in that field,” he says. “It’s a relatively small field that is quickly expanding. There’s a lot of potential.”

Part of his balanced experience at Transy included additional real-world experience, this time in the work force. Responding to professor Eva Csuhai’s email about industry internship opportunities, he secured a paid internship in the quality lab at Buffalo Trace, under the management of another Transy grad.

The internship and job at Buffalo Trace were “really great,” he says, and helped him become more confident that research is what he wants to do. “I knew I wanted to go on and do my Ph.D.”

That ongoing support from Transy faculty extends through professor Jessica Brown, who has offered to help him when it’s time to prepare to defend his dissertation.

Ultimately, Henderson concludes, “I’m really glad I chose Transy because of all of the research opportunities I wouldn’t have had at a large state school.” Likewise, he notes, the liberal arts “help with the writing and communication aspects of it. And it helps to not be completely buried in the weeds of just pure chemistry classes. You get more of a rounded aspect of it.”

This summer, while gearing up in the UK lab, he’s also been excited to work with professor Schnitzenbaumer to write up the work completed at Transy. The goal is to submit it to a journal in the fall.

Looking ahead to life after his Ph.D., he’s interested in all the possibilities — of being a researcher or professor or potentially spinning off a business. He understands just how well he’s been prepared.