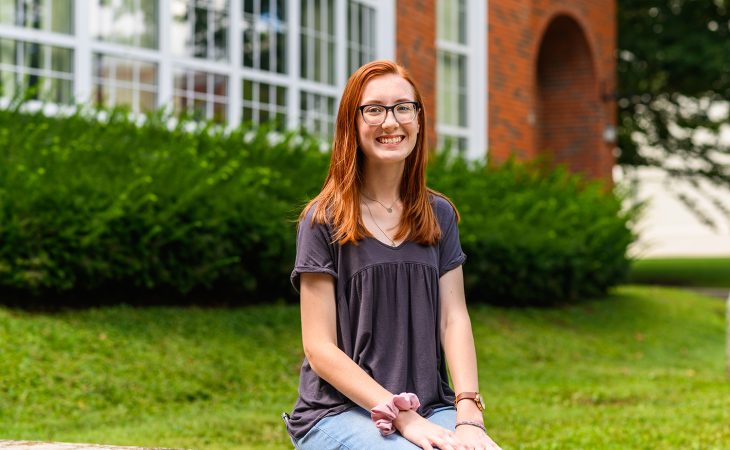 When Transylvania University junior Caroline Hawk, a future wildlife conservationist and veterinarian, is asked to name her favorite animal along with the origins of her career path, she admits to being torn between the penguins who gave her entrée into the world of wild animals and the endangered large cats that grip her imagination.

Feeding older penguins by hand allowed Hawk the time and proximity to observe them. As part of her duties as a youth volunteer for the Louisville Zoo, she marveled as their individual personalities emerged. The idea of devoting her life to the care and conservation of wild animals began there and grew at Transy as she became involved in environmental sustainability initiatives on campus.

Given these interests, the shift of her attention last summer to microscopic worms (elegans) and nanoparticles may have seemed a stretch at first. But as soon as she understood how the research project in an environmental toxicology lab could have direct impact on wildlife, the biochemistry major and French minor was eager to jump in and put her Transy skills into practice.

Accepted into the summer SURES (Undergraduate Research Experience in Environmental Health Sciences) program at the University of Kentucky, funded by the National Institute of Health, Hawk joined the effort to develop an environmentally friendly pesticide for commercial agriculture that uses nanoparticles to target specific pests.

In the process, Hawk was able to gauge her abilities in a setting off campus among peers, Ph.D. candidates, postdoc students and professors from multiple disciplines. She saw how Transy had prepared her to make contributions in the lab, and how the breadth and rigor of her liberal arts background made her comfortable communicating with people of all levels and interests.

In terms of academic preparation, Hawk discovered just how much she had learned in her first two years at Transy and how she enjoyed putting the skills and knowledge into practice.

She describes how taking a Quantitative Analytical Chemistry class helped hone her lab techniques to get really efficient results with a very small percentage of error. This came in handy during the research project.

As a sophomore taking Biologists’ Toolkit, she had learned about biostatistics. As a result, Hawk was able to do the essential work of analyzing the research and translating prodigious amounts of data into usable information. Her summer Ph.D. lab partners had noticed the related software on her computer and remarked on how many undergrads never get that practice.

This fall in Transy’s Biologists’ Toolkit class, Hawk will be a teaching assistant to Professor of Biology James Wagner and a tutor for her peers who may need help using computers to translate data into graphs.

After Transy, she’s considering a dual degree program in veterinarian medicine and a Ph.D. “I can work with animals, hands-on, and contribute toward conservation research for the environment, which is the perfect pathway for my two interests,” she says.

As an additional nod to the usefulness of the liberal arts, she’ll put her knowledge of French to work.

“It’s another weird way the liberal arts thing comes into play,” she says with amused satisfaction. She recalls her adviser encouraging her to think of her knowledge of French as an important tool for her tool belt.

“Funny coincidence,” she says, as she begins to think about fieldwork in Africa. “A lot of the places with wildlife reserves speak French.”

Biologists’ Toolkit: Transy professors Sarah Bray, Paul Duffin and James Wagner developed a sophomore-level course “to focus on the competencies of quantitative reasoning and scientific communication.” Read more about their approach in the article “Thinking deeply about quantitative analysis: Building a Biologists’ Toolkit.”