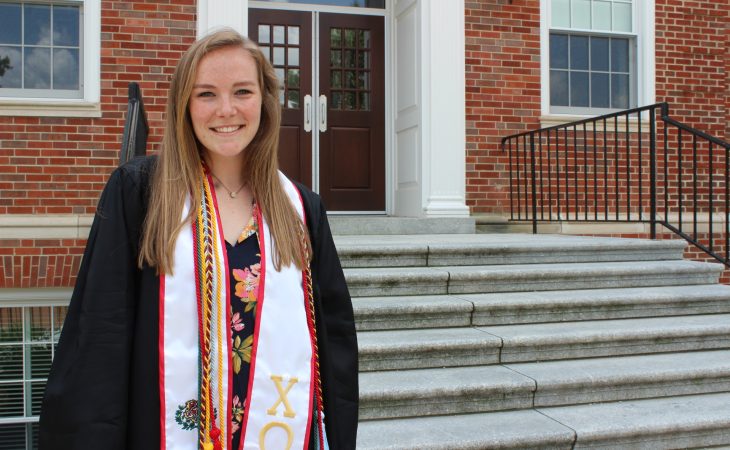 It is no small feat to receive the Charles and Susan Shearer Scholarship.

Created by the Board of Trustees to honor the Shearers’ nearly 30 years of service to Transylvania, the scholarship is awarded each year to two exceptional Pioneers who have “demonstrated outstanding academic performance, impressive leadership qualities, significant campus contributions and tremendous strength of character.”

Recent graduate Emily Hayes ’19 recalls just how powerful it was to receive the scholarship — the freedom and peace of mind that the financial assistance gave her to focus solely on the demands of her senior year, and the support and validation she received from her community.

Even the “best and brightest,” as described by the scholarship, need the kind of encouragement from peers and faculty that helps them fully recognize and believe in their own abilities.

Hayes recounts how the multiple layers of support she received at Transy helped her build an undergraduate career worthy of the Shearer Scholarship and, ultimately, of acceptance into the University of Kentucky College of Medicine.

When the Walton, Kentucky, native first visited Transy as a junior at Ryle High School with her AP biology classmate Amber Phillips ’19, she was drawn to the demanding STEM curriculum. And she loved the friendly campus.

“As soon as I stepped onto Transy’s campus, it felt different, it felt right,” she says. “I was really excited about the science program. It ended up working out really well.”

Hayes appreciated the flexibility to choose exercise science or biology. “I talked to faculty and STEM students and learned that either direction would be amazing at Transy.”

As she devoted herself to classwork, she quickly discovered that community involvement, not just academic preparation, was integral to her growth as a person and a pre-med candidate. Studying wasn’t enough. She needed more connection and challenges that took her outside of the familiar. So, she joined Residence Life as an adviser and gained an instant family. She tutored at the Carnegie Center, just a short walk to the other end of Gratz Park, first as part of a work-study program and then as a volunteer. She joined a sorority after being inspired by the caliber of its members, hoping to become that same inspiration to others. She tapped into the Transy network of pre-health contacts for shadowing opportunities in the medical profession.

Being pre-med in Transy’s liberal arts environment meant that Hayes would take classes outside her biology major, an experience that enriched her understanding of her future profession. She considered minoring in Spanish, but after her tutoring experience at Carnegie and in Transy’s Writing Center, she chose to take education classes in order to better understand the teaching process. The classes helped her define her approach to medicine.

“I’d been very science focused,” she notes. “Taking other classes let me meet and look at different communities on campus.” She saw how the “topics we talked about — connecting with students, figuring out different ways to manage and problem-solve, autonomy — could actually translate into my future career in medicine.” She better understood how education could alter the lives of her future patients — and her work as a pediatrician.

I’ve always looked at medicine as a form of teaching about health. It’s more about connecting with patients, and actually building that relationship of trust.

“Beginning your life with a good base of knowledge and health is going to set you up for the rest of your life,” she adds. “There are so many studies that show that if you’re doing things right from the age of 12-25, you’ll have better chances for the next 75 years.”

When the Shearer Scholarship was presented as an option, Hayes had her doubts. But as she talked with faculty who would write letters of recommendation, she saw their confidence in her.

“It was humbling,” she says, “and let me believe in myself more.”

After hearing all those things, she thought, “Maybe I am what they’re saying and now I can be more intentional, and use their praise to guide the things I’m doing in the future.”

She drew on this new confidence in her application to medical school. But it was the strategic guidance offered by Transy’s pre-health program that helped her cross the finish line.

“There are so many different things that come together to decide if you’re going to get into med school,” Hayes notes. “You can have the best score and GPA and shadowing, but if you apply too late you won’t get in, because there is such a high volume of applicants.”

When she received a late interview date, Transy’s pre-health advocate guided her to take immediate action.

“I was very fortunate to have that support system,” says Hayes. “My application wouldn’t have been as good and my interview would have been too late. I would have been waitlisted at best. Two days after I called, an interview spot opened. I was admitted in early December and the class filled a week later.”

Hayes already can imagine the impact that she can have as a physician in her community. “Any increased effort to try to help people and help them help their children is what we need to focus on,” she says. “Better education for all children about their health — that’s what I’m drawn to the most. But I still have four years to really decide!”

Enthusiastic about her choice to attend Transy, she remembers what she told her younger sister who recently committed to being a Pioneer at Transylvania.

“I think that Transy will give you as many opportunities as you are willing to reach out for: clubs, organizations, community service projects you can join any day of the week. There’s always something going on, always ways for you to get more involved.

“That involvement can also support your academics, which is something that Transy holds in high regard. By reaching out and trying new things – that’s what the Transy community is about. Whether it’s a new sport you’ve never played before or organizations like SAB and Admissions. There are so many opportunities that will feed into you; and you can make your own path and do whatever you want with them.”