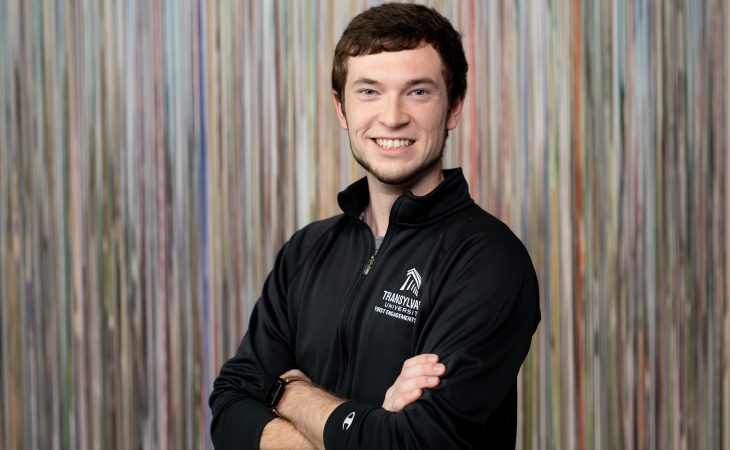 Whether working for his dad’s landscaping company on sweltering summer days in Paris, Kentucky, or watching carbon quantum dots fluoresce red in the lab, or tutoring peers at Transy, Daniel Cooper ’19 is drawn to perceptible results — that “something tangible you can see.”

This summer, the affable biochemistry graduate and trumpet player is donning the white coat of the medical profession in a ceremony marking his entry into medical school at the University of Kentucky. It is the latest in a series of institutional validations, including numerous awards and scholarships he received while at Transylvania.

As a rising senior, Cooper received the Charles and Susan Shearer Scholarship, which celebrates a student’s character and commitment to campus and community along with academic achievement. “To have something physical to show for the effort that I put forward meant a lot to me,” he acknowledges. He credits his parents (his mother, Kathryn Welsh Cooper ’83, is also a Pioneer) for teaching him the value of hard work and for giving him the freedom and encouragement to pursue his interests.

“My two loves in life are people and chemistry,” says Cooper, who plunged himself whole-heartedly into the many dimensions of his Transy career.

“Transy is the single best decision I ever made in my life,” says Cooper, pointing to the cultural and academic preparation, the intimate campus, the proximity to professional opportunities, peers who inspire and support him and professors, he adds with gratitude, “who keep you on track.”

The second I set foot on campus, I could easily see myself at Transy because it was downtown and near a major hospital, which very much aligned with my intended career path.

Cooper remembers graduating from high school fully committed to chemistry and a career in medicine. But as his scope and perspective grew at Transy, he gravitated toward biochemistry as his major. “I realized there’s a kind of marriage between chemistry and biology,” he says. In living organisms, “it’s the marriage between knowing how something works on the micro-scale level and how it affects the whole organism,” he explains. “I enjoyed that whole intersection.”

His second-best decision, he says, was joining Delta Sigma Phi, “because it really got me into this network of people who were not only smart and role models, but also motivated me to be a better person.”

My peers have motivated me and molded me into the individual that I am because I looked up to them so much.

With encouragement from his fraternity brothers, particularly J.T. Henderson ’18 and Joseph Gearon ’18 (both former Shearer scholars), he volunteered for Habitat for Humanity, served as chief of staff in SGA, and prepared for the Shearer Scholarship application. They connected him with shadowing opportunities, such as the pop-up health clinic in Hazard. The whole process was “fulfilling and gratifying,” he notes.

Volunteering at the clinic in Hazard gave him a chance to see the impact of family care in rural Kentucky. It’s a direction his future medical practice could take.

“Kentucky’s need for rural care, preventative care, ranks near the top in the nation,” he says, acknowledging the pressing need for primary physicians and to address the opioid crisis.

He would like to practice medicine in Kentucky, and is drawn to primary care and anesthesiology. He has shadowed in operating and emergency rooms. Still, he plans to enter medical school with an open mind in terms of a specialty.

Ultimately, his long-term interest is inspired by his experience as a tutor and first engagements orientation leader, and by what he refers to as “a larger theme of Transy, which is to help to begin to give back, to kind of pay this debt that I feel I owe.”

He adds, “I don’t think I would have been successful on the same magnitude if I’d gone anywhere else. I honestly think that being here at Transy, the planets aligned. I got out of Transy what I wanted because I was given the opportunities by Transy to better myself, to join extra curriculars, to perform well in school.”

As a result, Cooper says he wants to give back “and help other people find their light.” For him, that means working at a teaching hospital where he can “help the next wave of physicians understand how to be a good physician.

“Transy has given me so much,” he concludes, “I’d like to start to give back – whether it be monetary or as a role model or a tutor for someone.”

No doubt, the results of his efforts will be visible to all.