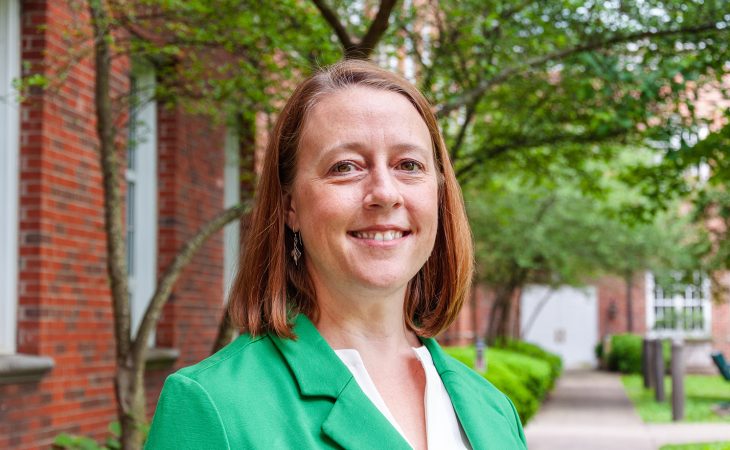 Sarah Bray, Transylvania University’s associate dean for academic affairs, has no problem identifying the stately tree outside her new office’s window: a pin oak, like the other one flanking the Old Morrison administration building.

A biology professor specializing in botany, Bray recently began as associate dean on a permanent basis after briefly serving as interim. This fall will be her first full term in the new role. “I’m excited to see what a new school year brings,” she said.

Bray takes over from Michael Cairo, who this summer became interim vice president for academic affairs and dean of the university.

Her primary duties include working with students who are struggling academically and supervising the directors of the Writing Center, First Year Seminar and Learning Skills programs. She also represents the dean’s office on the Committee on Admissions and Academic Standards.

One of Bray’s goals is to help secure more external grants for faculty members. “I’d really like to find ways to support faculty scholarship and faculty research with students,” she said. Another goal is to increase student retention.

In addition to her duties as associate dean for academic affairs, she will teach a Diversity of Life class this fall. Bray, who began at Transylvania in 2007, specializes in invasive plants and their effect on ecology. She has a Ph.D. in botany from the University of Florida and earned her undergraduate degree from Coe College.

Bray has been working lately with the Urban Forestry Initiative, which this past October sponsored a Tree Walk and poetry and art under the trees at Transy.

She wants to raise awareness of trees on campus and work on maintaining and diversifying them for a variety of reasons — from beautification to education to increasing the physical and mental health of the Transy community.

As for the one outside her window, she’d like to go through historical photos of Old Morrison to find out when it — and the one on the other side of the steps — were planted. The oaks, after all, not only look nice but provide shade during the May commencement ceremony. “Graduation would be very hot without them,” she said.