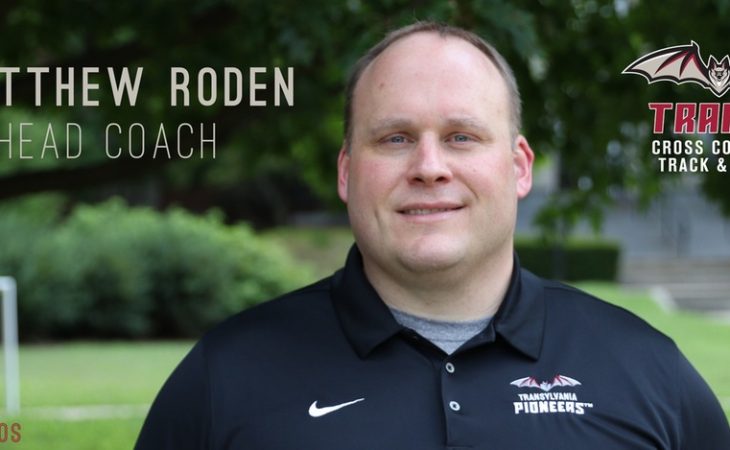 A version of this story originally appeared on TransySports.com.

Matthew Roden has been named the new head coach of the Transylvania University track and field and cross country teams.

Roden was assistant coach with throws at Transylvania this past season, when the Pioneers set 25 records and captured an individual national runner-up title at the 2019 NCAA Division III Outdoor Track and Field National Championships.

“Matthew will continue to build upon the work that has been done with our program and elevate it to the next level,” Vice President for Athletics Holly Sheilley said. “We are delighted to have him as our head coach.”

Roden takes over from head coach Taylor Throckmorton, who returned to North Central College (Ill.) in a new coaching capacity with the Cardinals.

“I am incredibly grateful for the opportunity to become the next head coach at Transylvania University and excited about what we can do here,” he said. “I consider myself extremely lucky to have been a part of last year’s team that saw a tremendous amount of success on a personal, program and national level.”

His impact was most felt through the guidance he offered Graham Smith ’19, the national runner-up in men’s javelin. Smith was the first male All-American in program history.

Roden’s appointment as Transylvania’s new head coach marks his second stint as a collegiate head coach. Prior to joining the Pioneers coaching staff in 2018, he served as the interim head coach at Emory & Henry College in Virginia, where he was instrumental in getting a new track and field program off the ground.

Before that, Roden coached at Division I programs including Elon University and Coastal Carolina University.

As a student-athlete, he forged a decorated career at both Coastal Carolina — capturing the 2002 Big South Conference Championship in the hammer throw — and the University of North Carolina Wilmington, where he holds the school record in men’s hammer throw.

Roden is certified by USA Track & Field in Level I Coaching and Level II Coaching (Throws) and will transition into his role as head coach of Transylvania cross country and track and field immediately.