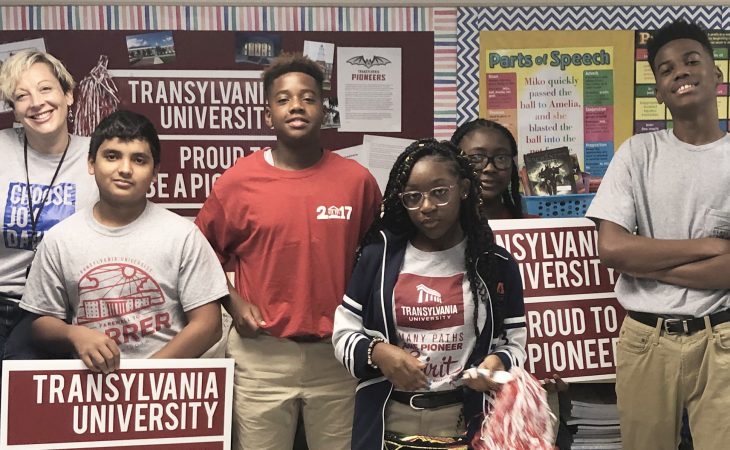 Eighth graders at KIPP South Fulton Academy in Atlanta have named their classroom “Transylvania University” after their teacher’s alma mater.

These students of Kate McClinton (Raitiere) ’06 are carrying on a school tradition. To instill in them the idea of college and of the opportunities that await them in the world, classrooms are named after schools the teachers graduated from, she said. “At KSFA our mission and values push the scholars to be prepared when they leave our doors at the end of graduation to be successful ‘to and through’ college.”

The Transy connection goes beyond the name. The university sent the class of more than 30 scholars plenty of swag — from pens to pom-poms — and they learned some Transy trivia on their first day. McClinton said they also plan to rep the Pioneers by making their own Transylvania T-shirts.

McClinton, who also has taught in Chicago and at Lexington’s Bryan Station Middle School, gave her students the choice of naming the class after the three schools she attended — the other two being Georgetown College and Western Governors University‎. “The scholars I talked to said they wanted to stick with TU because they already knew it to be an excellent school with lots of opportunity.”

Their class this year aims to meet or beat all of the individual goals in the Georgia Milestones Assessment System, and, as a grade level, top the Atlanta network and state averages. “We know with TU backing and supporting us that we have big shoes to fill — and we are ready for the challenge,” McClinton said.