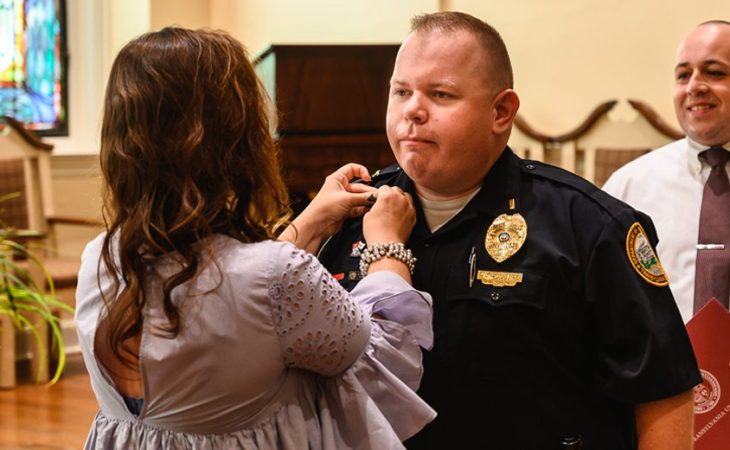 Having this promotion ceremony in the chapel earlier this month was apropos for McClure, who, in addition to helping keep campus safe through his job with the Department of Public Safety, is pastor of Buena Vista Baptist Church in Garrard County.

His two careers have more in common than you might think. McClure — who earned a bachelor’s degree in human services and psychology, and a master’s in justice administration — is a big proponent of getting to know the people his department serves. And the counseling experience he has gained through his pastoral work and formal education helps him comfort students in distress.

“I really love to help people that just need a little extra help,” he said.

This could include counseling students struggling with being away from home for the first time, or those facing difficulties in a relationship — or with loss. When a Transy student’s grandmother died and she couldn’t travel home for the funeral, McClure was able to console her. “I love being able to do things like that,” he said.

His work of caring began when he was still in high school. By then McClure, who had been involved with church his whole life, had developed an interest in public speaking, and he began filling in for a pastor at a church in Rockcastle County, where he’s from.

Later he went on to balance his ministerial role with other jobs — including serving as a sheriff’s deputy and an interim park manager for the William Whitley House State Historic Site in Lincoln County.

At Buena Vista, which has more than tripled attendance under his leadership, he puts an emphasis on assisting local families. “It’s really different than any church I’ve been at,” McClure said. “It’s a very community-minded church.” They perform a variety of outreach — from providing back-to-school clothing to families in need, to helping job seekers write resumes, to offering free haircuts.

Working for Transy’s DPS is another way for McClure to make a positive impact in a community. “Yes, we are here to enforce rules, laws and regulations — but we’re also here to help you with the other things that you’ve got going on as a student here,” he said. “That’s what I really want the students to be able to see ­— DPS is more than just a regular law enforcement agency.”

Specifically, he would like to expand the university’s Adopt a Dorm program, where each officer is assigned a residence hall and really gets to know the students living there and work closely with resident advisers.

Also, a few weeks ago McClure and a fellow officer visited Lexington’s Winburn neighborhood, where, along with other agencies and Fayette County Public Schools, they hosted an event for kids to interact with officers in a positive way — for instance, they enjoyed hamburgers and hotdogs together.

So it’s through both an emphasis on community policing and the ministry that McClure can strengthen the bonds of a community and reach out to individuals in need.

“Helping people has really been pretty much what I have done almost all of my life,” he said.