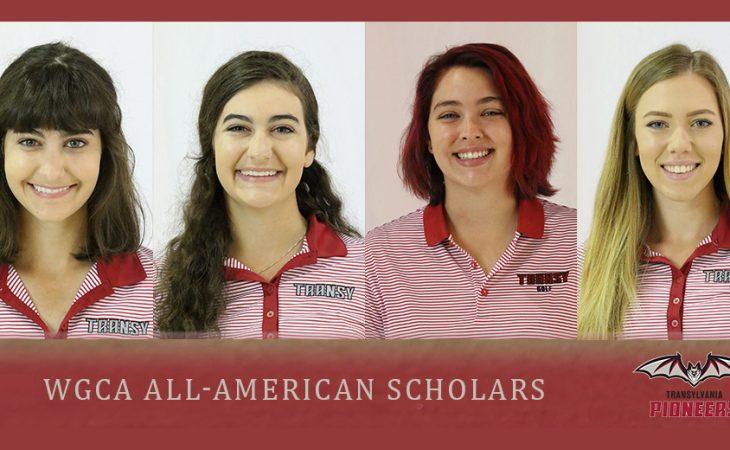 Transylvania University’s women’s golf team further cemented its standard for national excellence both on the links and in the classroom during the 2018-19 season, recording the fourth-highest team grade-point average across all teams in NCAA Division III women’s golf in earning 2018-19 WGCA All-Scholar Team GPA honors.

The annual academic awards furnished Thursday by the Women’s Golf Coaches Association recognized the Pioneers women’s golf team, which delivered a 3.752 GPA for the this past academic year.

The award recognizes women’s collegiate golf programs in Division I, II and III with the highest collective average team GPAs. The top 25 teams by GPA in all three divisions were recognized with WGCA with All-Scholar Team awards.

Only three teams in NCAA Division III recorded a higher GPA than the Pioneers, with Marietta College, Southwestern University and Macalester College posting the top three team GPAs. The 2018-19 campaign marked the second-straight year in which the Pioneers finished in the top-four nationally for team GPA.

Of the teams with the five highest GPAs in the nation, the Pioneers were the sole program to also qualify for the NCAA Division III women’s golf national championship in May, where they recorded a 15th-place finish for the second straight season.

The Pioneers are coached by Tyrus York, who completed his fourth spring season at the helm for the Transylvania women’s golf program.

The Women’s Golf Coaches Association, founded in 1983, is a nonprofit organization representing women’s collegiate golf coaches and represents over 600 coaches throughout the United States.