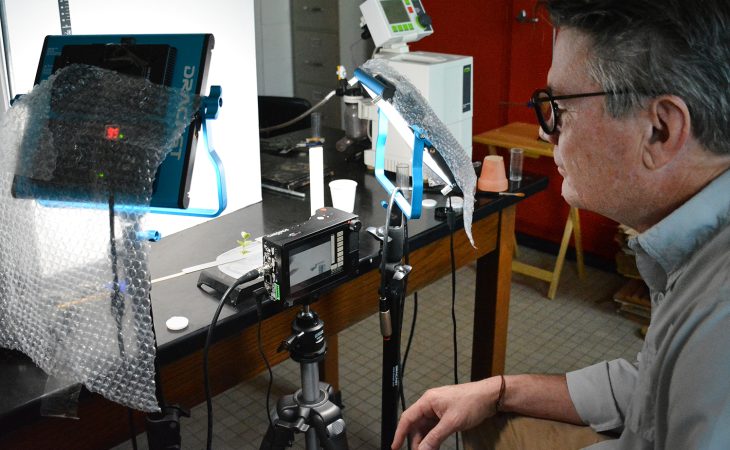 When James Wagner’s research subjects jump, they’re moving no faster than 1.3 miles per hour — but he needs a high-speed camera to adequately capture the movement.

That’s because these striped lynx spiders are so small — about the size of your pinkie nail — that relative to their body size, they’re “like a rocket ship” at that speed, said Wagner, a biology professor at Transylvania University.

Wagner, who recently bought the camera with a grant from the David and Betty Jones Faculty Development Fund, is studying the mechanics of how these iridescent, bronzy arachnids jump — and why they do so. “This spider has been generally ignored by researchers, which is why I wanted to work on it — it’s wide open,” he said.

In a Brown Science Center lab, Wagner set up the camera in front of a spider launching pad (a platform surrounded by water) — a short distance from a tiny landing branch with leaves. Photographing and shooting video of them them takes patience, considering the field of view is just a few inches, and they have to jump in the right direction. Once the movement is captured, a computer records data such as velocity, acceleration and distance.

Wagner this summer is writing a paper to characterize the leaps. For instance, he will discuss how the spiders exhibit stereotypical behaviors, such as holding up their legs before and during their jumps (which seems counterintuitive because it increases air resistance, especially because the legs are covered with spikes).

Wagner thinks they lift their legs to prevent tumbling through the air. “They have such an explosive force propelling them forward from those back legs, if they didn’t try to counterforce it they would just end up in a summersault.” In other words, they would lose control and have no idea where they were going to end up.

As for why they jump, Wagner believes that unlike other spiders that do so to capture prey, the striped lynxes simply want to leap from one branch or leaf to another — sometimes at great relative distances. “They’re able to use this explosive movement to get pretty far,” Wagner said. For comparison, humans jump 1.8 times their body length; these spiders jump about 6.5 times their own length.

“It’s a way to get around in their environment, moving through the complex, 3D vegetation,” he said.