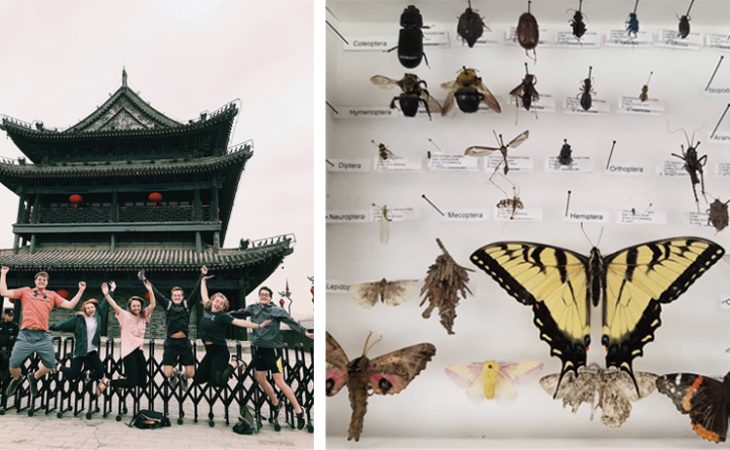 The winners of Transylvania University’s inaugural May term photo contest capture a spirit of exploration — both culturally and scientifically.

Josh Porter won the student award for a photo (above left) of him and classmates jumping at the Xi’an City Wall during the travel course China’s Capitals: Exploring the Bases of Power Through Politics and Art. In his Instagram post, Porter (pictured far right) wrote: “Jumping for joy because no one has caused an international crisis ~yet~”.

This year’s faculty May term photo award went to Josh Adkins, lab coordinator and biology instructor, for his photos of pinned insects that were part of his Entomology class. Adkins wrote: “This year’s Entomology class was incredibly fun! The student collections included lots of cool insects, a few of which … I had never seen before!”

Other photos depicting #TUMayTerm adventures include snowy scenes from Germany and Delta Sigs in front of the Great Sphinx of Giza.

Transy’s four-week May term offers plenty of opportunities for great photography, with its fun, visually interesting courses both abroad and at home — for instance, Public Policy and the Culture of Health in the Netherlands; DIY and the Rise of the Amateur Expert; and Confronting Climate Change, where students stenciled images on sidewalks around campus with eco-friendly materials.

During May term, students concentrate on just one class, which is often interdisciplinary and taught by more than one professor.