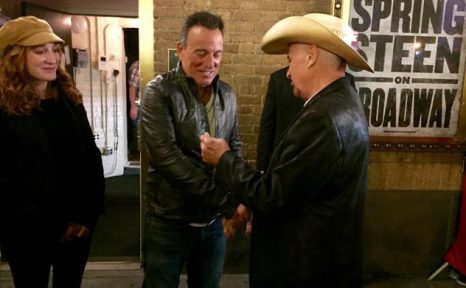 Three men who stood together as college students during the troublesome Vietnam War era now stand together in the face of a different sort of struggle.

One of these Transylvania University alums, Jon Alexander ’71, was diagnosed with prostate and bone cancer a few years ago. Since then the other two, Barry Bronson ’70 and Chris Compton ’71, have been there with him, as they were back when Alexander, the Student Government Association president, grabbed a bullhorn and addressed National Guard troops and University of Kentucky students who had ended up on Transy’s campus as post-Kent State protests raged across town.

“Who would have thought that 50 years later these same two men would once again stand with me in another ‘volatile’ situation, as I battled stage IV metastatic bone cancer,” Alexander said.

Bronson, in fact, gave so much support to his ailing friend that a group called Cancer Family Care recently gave him the Joslin Haggart Yeiser Unsung Hero Award at a ceremony in Cincinnati.

After Compton, who was Alexander’s SGA vice president at Transy, helped arrange a consultation at the renowned Cleveland Clinic Cancer Center, Bronson bought Alexander a plane ticket to fly to Lexington from his home state of California — and then Bronson, his Pi Kappa Alpha brother, drove him to the Cleveland Clinic. As Alexander’s condition worsened, Bronson also repeatedly took his friend to the Louisville area for treatments, which because of a Medicare stipulation were more affordable in Kentucky.

“Given the accompanying chills, fatigue, sweats, nausea and vomiting, he cooked for me, took me to church and drove me whenever the occasion necessitated, never failing to bring light and even humor to what was a dark and depressing time,” Alexander said. “Plain and simple, without this loving, compassionate human being that I’m blessed to call brother, I would never have been able to receive the immunology treatment I’d traveled 2,000 miles to receive.” Alexander called Bronson’s efforts a “much needed injection of hope.”

Add that to what happened a year earlier.

That’s when Compton called up Bronson and suggested they take Alexander to a Bruce Springsteen show on Broadway. Originally from New Jersey, Alexander had seen The Boss in concert 84 times.

After learning he was going to the show, former attorney Alexander wrote a letter to Springsteen about how much his music had helped bolster his morale in his fight against cancer. Along with the letter, Alexander wanted to include a Los Angeles Times story about his successful defense of Diane Grue, an Orange County homeless woman. The story concludes: “As the family celebrated, attorney Alexander, who defended Grue for no fee, broke out his guitar. Right there, at the front door of the courthouse, he began singing Bruce Springsteen’s ‘Ghost of Tom Joad,’ an ode to the destitute.”

Bronson, a writer and public relations consultant, then got in contact with Springsteen’s management and forwarded the letter, story and their seat locations (they could get only two tickets so it was just him and Alexander). “Immediately after the show at the Walter Kerr Theatre a man who identified himself as Bruce’s security head, motioned for us to follow him out the backstage door,” Bronson said. “He said Bruce wanted to meet Jon. Seconds later, Bruce and wife Patti emerged and went straight for Jon. To me, it seemed like a reunion of great friends. I was happy to catch the meeting with my camera.”

Also, a couple years ago Compton invited Alexander to Keeneland and arranged a reception for him at the Thoroughbred Club of America. “When you’re in poor health, the best thing you can do is be around friends,” Compton said.

While Compton — who along with Alexander nominated Bronson for the award — only recently became reacquainted with Alexander, Bronson had kept in touch with him over the years, visiting him at the Outer Banks bar he owned and in California during the ’80s when Alexander lived there.

“We stayed close, sharing a friendship and a love of rock ‘n’ roll,” Bronson said.

For Compton, it was Bronson’s quiet, unselfish support that led to his nomination. “I watched Barry’s continuing friendship with Jon,” Compton said. “It was unwavering.”

Bronson said he was motivated to help a brother — one who would have been there for him had their situations been reversed.

“For me, just attending the Cancer Family Care banquet in Cincinnati was an honor,” Bronson said. “I got to hear cancer survivors tell their stories and hear about caregivers who made my small contribution seem minor. Really humbling and gratifying.”