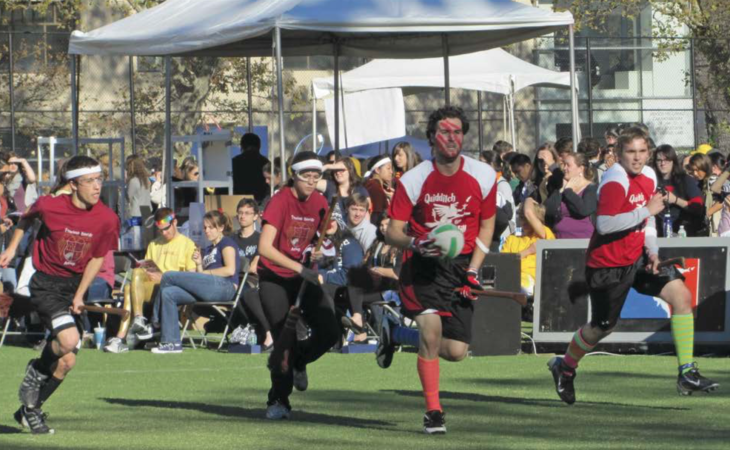 Quidditch came to Transylvania University in 2009 and hit the ground flying — er — running. The activity soon evolved from a novelty sport to a campuswide social experience with 200 members, and it made an impact extending well beyond campus.

The sport comes from the popular book series “Harry Potter,” which imagines wizards flying around on broomsticks and playing a full-contact game in which, at its simplest form, players try to throw flying balls through three hoops. Muggle Quidditch (“Muggles” referring to non-magical people) was created on college campuses across the country and employed most of the same rules — except, presumably, flying is considered cheating.

Transylvania’s Quidditch team — the Transylvania Animagi — competed against other schools in the region, and in November 2010 the team went to New York City to play in the Quidditch World Cup against 45 other colleges.

The event picked up major steam on social media and eventually landed in mainstream media. The Animagi were one of two teams featured on MTV’s “The Seven,” when host Kevin Manno suited up with the team and played a match on camera. Transy also was one of the teams featured in Time magazine’s story on the World Cup.

But the sports side of Transylvania Quidditch was only a small part of the student organization. Quidditch players also threw a Yule Ball dance and delivered chocolates to dorm rooms on broomsticks.

Additionally, Transylvania faculty and staff dressed as Harry Potter characters for Quidditch events, including a Sorting Hat Ceremony in which students were placed into “Harry Potter” houses.

Even with all the iterations of Transylvania Quidditch, it’s community service that gave the members the most fulfillment. The main focus of the International Quidditch Association (it still exists) is to promote the love of literature to youth, and Transy joined right in.

The team organized a book drive that collected more than 650 books for underprivileged people in Lexington and participated in Read Across America Day. The team also planned to do reading programs with a local community center for children.

“We will encourage kids to read books for rewards like T-shirts and the chance to have us come play an exhibition match for them,” Grenier said. “It’s a way to promote literacy to these kids.”

The players also helped start Quidditch teams at other schools in the area, including Henry Clay High School in Lexington and Harrison County (Kentucky) High School. And they planned to host a Tri-State Tournament with teams from Kentucky, Indiana and Ohio — and host the Kentucky Cup featuring college and high school teams in the state. Additionally, over spring break they played exhibitions at college campuses across Kentucky.

“There are so many things for people to latch onto in Quidditch,” Grenier said. “We want to see it remain a fun thing for students to participate in and not see it take itself too seriously.”

A version of this article appeared in the Spring 2011 Transylvania University Magazine (now called Third & Broadway).

The Transy team passes by at 3:45 in this video from the 2010 Quidditch World Cup opening parade. Fly Animagi!