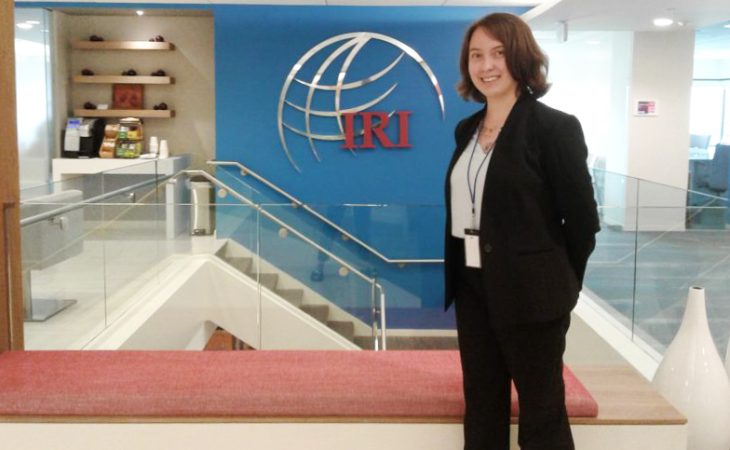 Although her family lives in the Washington, D.C., area, Moira Hedrick chose to attend Transy. “I like being able to get off campus and do things, she says. “Lexington was that nice balance — it was small but still urban, and there was stuff going on.”

However, interning in Washington continued to be her dream. Last year she volunteered at the National Air and Space Museum, occasionally putting her new Chinese language skills to use. (As a junior at Transy, she won a national Chinese writing competition.) Recently, she landed a paid internship with a non-governmental organization (NGO), “working to promote free and fair elections” in Southeast Asia.

She tells us about her experience there.

“This summer, I have the privilege to intern at the International Republican Institute (IRI), an NGO based in Washington, D.C., with offices around the world. IRI is a nonpartisan arm of the National Endowment for Democracy [largely funded by the U.S. Congress through a grant from the U.S. Information Agency], with the goal of humanitarian work to promote free and fair elections and increase the capabilities of local populations to be more politically active. This includes helping to uplift the voices of ethnic and religious minorities, LGBTQ and women.”

“As an intern at IRI, I have been doing work in Southeast Asia, with a particular focus on research. I have already learned a lot about the different processes in running an NGO. My research work has also afforded me the opportunity to learn a lot more about Southeast Asia and the various political barriers people face, and the ways IRI is trying to counter human rights violations in the region by working with local populations and governments.”

“Working in D.C. has been an incredible experience so far. This is the heart of America’s work in international affairs. It seems there are hundreds of different events happening every day, some of which I have had the privilege to attend, such as a roundtable discussion at the U.S. Institute of Peace. IRI hosts a wide variety of events in which I have been able to meet experts and leaders from multiple countries here to help further their own work in humanitarian efforts around the globe. (Truly, a networking experience like no other.)”

“I would recommend an internship in D.C. to anyone seeking a career in politics or international affairs. Nowhere else will offer the same opportunities and connections. … D.C. is an exciting city to work in. I am thankful to have had this opportunity to work at IRI and spend the summer working alongside people determined to help make the world a little more free.”

You can ask her more about her experience during Phonathon. She’ll be making calls to raise scholarship funds for current and future Pioneers as well as helping to manage the team. It says a lot about Hedrick that she first joined the Phonathon to work through her phone anxieties. Last year, she was one of the top callers. The key? Pioneers’ encouragement and generosity of spirit. She loves connecting with alumni and sharing stories.