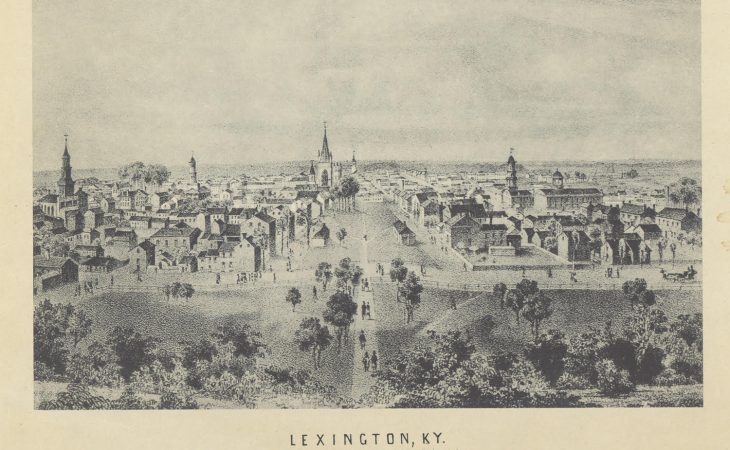 With Google Earth and all the drone photos floating around these days, we take for granted elevated views of our environs.

Back in the early 1850s, of course, the task required a bit more effort, as is noted by Burton Milward and Burton Milward Jr. in the Kentucky Review’s “The 1851 Bird’s-Eye View of Lexington: Three Versions.”

“Around 1851, an artist perched on the high roof of Transylvania’s Morrison Hall sketched the magnificent bird’s-eye view of Lexington that preserves, in careful detail, the mid-nineteenth century skyline of Lexington.”

Drawn by Ferdinand von Laer, the (above) image first appeared in “Western Scenery, or Land and River, Hill and Dale, in the Mississippi Valley,” which was published by Otto Onken — the Milwards refer to it as the “Onken drawing.” Transylvania’s Special Collections houses a copy of the image.

“This drawing became far and away the most frequently printed pictorial view of Lexington,” according to the Milwards. “Its widening panorama of buildings, residences, streets and trees stretching south to Main Street, and beyond, is attractive, familiar and informative.”

The Milwards detail how the drawing was modified over the years and appeared in various publications. They also list buildings that are depicted.

The view from above the university’s Old Morrison administration building (lower center in the photo below) certainly has changed since then.

The iconic building was constructed from 1830-34 under the supervision of Henry Clay, who both taught law and was a member of Transylvania’s Board of Trustees. Old Morrison is featured on the Lexington city seal, and during the Civil War it was turned into a makeshift hospital for Union troops. Two former professors are entombed in a crypt in the building — noted 19th-century botanist Constantine Rafinesque and languages professor Sauveur F. Bonfils. Every Halloween, students spend the night in the tomb, while the steps of Old Morrison are lined with 400+ pumpkins carved by students, faculty, staff and community members for what is called PumpkinMania.