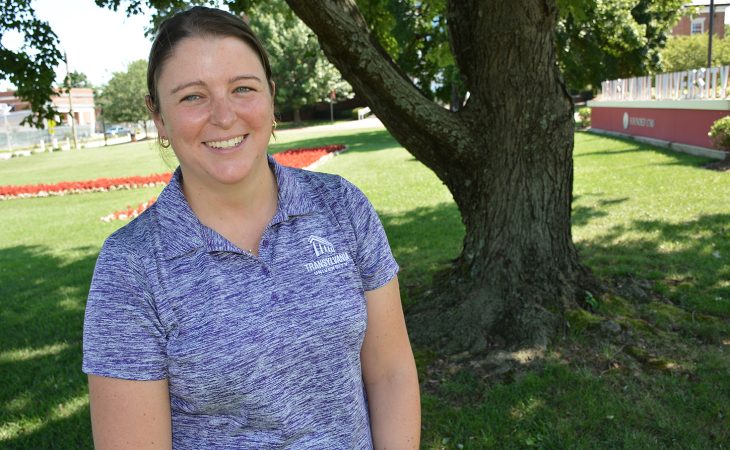 Transylvania University is quite literally blossoming under its new manager of campus appearance.

Kelsey Ley, who began this past November when the landscape was more brown than in bloom, helped design the hanging flower baskets along the circle in front of Carpenter Academic Center. She’s also had a hand in revitalizing the butterfly garden on the corner of Fourth Street and Broadway — it will have more flowers and fewer weeds.

Additional improvements are germinating. This summer Ley is helping come up with a plan to make the landscaping even better. “I have quite a few ideas,” she said.

Campus enhancements will include earlier mulching and improved fertilization and weed control. (The latter will be facilitated by training all the groundskeepers in pesticides use.) Ley also plans to adorn the hanging baskets with solar-powered lights for the winter — so they’re not just dangling there empty.

Groundskeepers also are taking classes like one at the University of Kentucky on turf maintenance. “We’re really going to push a continuing education program for our grounds,” Ley said.

She graduated from Michigan State University with a degree in sustainable parks, recreation and tourism, and had worked in the hotel industry since she was 18 — most recently as executive housekeeper at Embassy Suites on Newtown Pike. Ley is in charge of Transylvania’s housekeeping as well as landscaping.

In addition to focusing on professional development, she values collaboration. Ley doesn’t come in to a situation with her coworkers like: This is how it’s going to be done. “We come together and go: This is an issue we’re having, how can we better this?” she said. “We’ve got a good crew here.”

Her own supervisors have been supportive of her as well — as opposed the sink-or-swim process she sometimes faced in the hospitality industry. “This is one of the best places I’ve worked at,” she said. “I love it.”