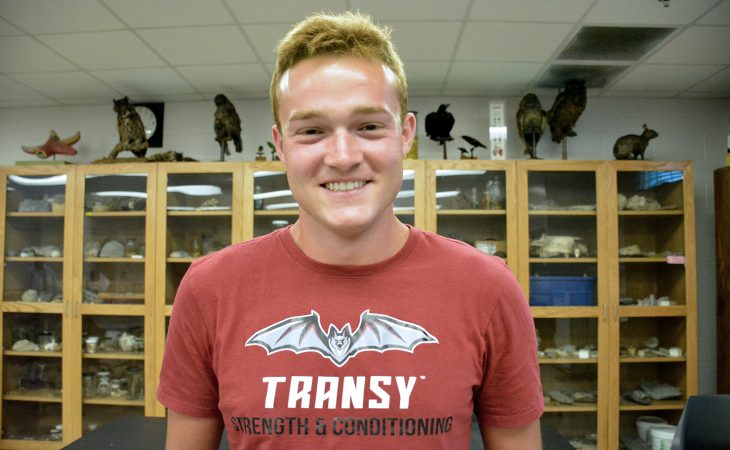 In grade school, Drew Dodds ’21 knew he wanted to be a doctor. Then, in high school, he discovered a new passion for business and joined the Future Business Leaders of America. “I was comfortable in both environments,” he explains.

So, when searching for a college, the competitive swimmer needed a place where he could develop his multiple interests. He wanted a campus where he could be successful academically — with a challenging pre-health STEM program — while also thriving as an athlete.

Dodds says he chose Transylvania, not so much because it’s “in his blood” (his parents, an aunt and two uncle are Pioneers*), but because all of these possibilities could be explored on an intimate campus in the city of Lexington.

Being able to major in biology and minor in chemistry and business administration makes all the difference to someone who plans to be a physician or surgeon and may even run his own practice one day. “The business administration minor allows you to explore every aspect,” he notes. “You take one class in every area of business. I really like that about the minor.”

In preparing for his future, the rising junior has a lot going on. Just this summer the native of Madisonville, Kentucky, attended medical school boot camp (including gross anatomy), participated in a research project on finches (appreciating attention to detail) and is about to intern in an emergency room. Last summer he interned in operating rooms.

I chose Transy for the small school in the big city,” he explains. “I tend to learn better in smaller groups. You can know the professor better, which is a big component of Transy that I really like.

As a sophomore, he was one of three Pioneers selected for early admission to medical school, an opportunity, along with Transy’s own pre-health program, that Professor of Chemistry Eva Csuhai strongly encourages her students not to miss. Early admission means a space is being saved for Dodds at the University of Kentucky College of Medicine-Northern Kentucky Campus. He still must make a successful application, but it’s something he now feels more confident about, thanks to the program’s offerings and Transy’s rigorous STEM (science, technology, engineering and math) and general education curriculum. Together, they’re preparing him to make the strongest application possible.

“Transy is one of the few schools that has the opportunity to do the Early Assurance Program,” says Dodds. “We get three spots.”

The medical school boot camp at the start of the summer offered experiences that are defining moments in a pre-health student’s aspirations, particularly gross anatomy.

“We were able to explore different parts of the brain, the spinal cord and nervous system,” he says. Students could hold every organ in their hands. “The coolest part to me,” he marvels, was the unravelling of the intestines, foot after foot. “It’s crazy how long that is.”

Dodds is already anticipating the additional help the program will give him as a rising senior next summer, through practice interviews and MCAT preparation. “And we’ll do case studies, write our findings and opinions, learn how to approach patients with our opinions.” All of this, he says, “will be very helpful when I’m applying.”

Transy’s pre-health curriculum prepared him to compete for the early assurance program and continues to build his knowledge and practice for admission to medical school.

“All of Transy’s STEM classes really push,” he says. “They’re intense. They’re hard. But they are classes that are going to make it easier in the long run to study for the MCAT or the DAT or for pharmacy. They make it easier for you to get a better score.” So, too, are the general education requirements, he adds, such as psychology and philosophy: “Those are big parts of some medical fields and are on the MCAT and required by other graduate pre-health schools.”

Additionally, research is often a requisite for medical school candidates. As a research assistant working for Associate Professor of Biology Becky Fox and the project’s counterpart at the University of Kentucky, David Westneat, Dodds says he’s learned about more than the behavior of finches as he’s dutifully recorded the birds’ daily activities for later analysis.

“Paying more attention to detail is something huge that’s coming from this,” he says of the care and diligence required. “Because you don’t want to mess up the data that someone is going to use for a project.”

All of these opportunities are developing a strong skillset and a broader understanding in Dodds. They also serve as a process of elimination as he recognizes the kind of surgery or research that ignites his interest, as did his boot camp participation.

“Back to the gross anatomy lab,” he concludes, recalling the mysteries of the human interior made visible, “it was very interesting and drove my passion even more for ‘this is what I want to do.’”