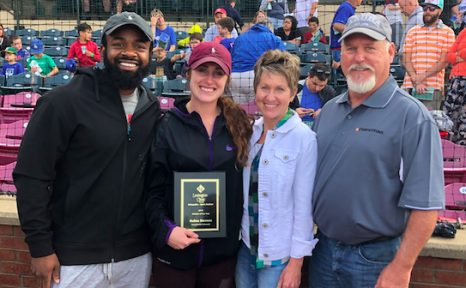 Bailee Stevens ’19, a member of the Transylvania women’s lacrosse team, was recently awarded the 2019 Lexington Clinic Sports Medicine Athlete of the Year award.

Stevens, a senior on the 2019 Transylvania women’s lacrosse team, accepted the annual award given to an athlete whose institution is associated with the Lexington Clinic.

A starting defender for the NCAA Tournament-qualifying Pioneers, Stevens overcame an injury to her ACL sustained at the beginning of her junior season to return to the field for her senior season; she served as a team captain for a Transylvania women’s lacrosse team which repeated as conference champions and advanced to the NCAA Tournament for the second straight year.

Stevens was nominated by the Transylvania athletic training staff who works in conjunction with the Lexington Clinic. Her candidacy was based on several criteria, including maintaining a minimum academic standard of a 3.0 grade-point average, giving back to the community through service, showing respect for coaches, teammates, officials, teachers, other students, and families, displaying altruism and helping teammates improve, and a commitment to practice, games, and personal skill development. The Lexington Clinic also stipulates that the athlete should demonstrate the true meaning of the word athlete.

After being chosen for the award, Stevens was recognized earlier this month at a local Lexington Legends baseball game and was presented with a plaque and a $500 gift by the Lexington Clinic. The Transylvania Athletic Department also received a $1,000 award from Lexington Clinic in being represented by Stevens.

Stevens completed a winning final season with the Pioneers which included a 15-5 team record, a second consecutive trip to the NCAA Tournament, and her individual selection to the Heartland Collegiate Lacrosse Conference’s All-HCLC First Team as a defender. Stevens graduated from Transylvania last month with a bachelor’s degree in Writing, Rhetoric, and Communications with a minor in Biology.

For more on Transylvania women’s lacrosse, follow @TransyWLax on Twitter. This article was originally posted on www.transysports.com.