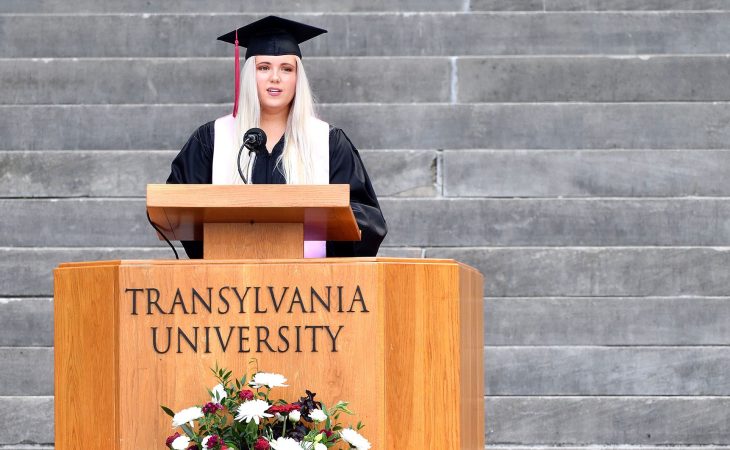 Although her teen years aren’t far behind her, something in Presli Neal’s countenance suggests an old soul, as if she were grounded in generations of experience. Eager to share the benefit of her knowledge, just as others have helped her, Neal is particularly drawn to nurturing young people. It’s one of the reasons she’s interested in pediatric care. And it was the driving factor in her desire to give Transylvania University’s 2019 commencement address.

Neal remembers being a first-year student and heeding the advice of the Class of 2015 speaker to “take every moment and run with it.” It helped her. Since then, she’s wanted to give the 2019 address and provide the same inspiration to younger audience members, aiding in their process of self-discovery. In her speech, the neuroscience major focused on the value of relationships and interconnection — between students and professors, friends, staff and mentors — that define the Transy experience. Read the entire speech here.

The first in her family to attend college, Neal pauses to reflect on the fact that she very nearly didn’t attend Transylvania. She remembers being two weeks from the start of her freshman year. She had enrolled at a larger university outside of her hometown of Lexington. She’d even met her roommate.  But there was this unremitting “gut feeling” that something was awry.

She kept thinking about her tour of Transy’s campus and how personal her connection had been with professors she met in the Brown Science Center. She couldn’t get over how deep their interest was in her as a person and in what she wanted to study.

“I woke up and knew that Transy was the place for me,” Neal says.

She notes that Transy gave her the opportunity to find her true interest. Like so many students, she entered college with a certain course of study in mind. She thought she would major in philosophy, politics and economics and then go on to law school. But something pulled her toward science in her first year as she sampled various disciplines in her general education classes. She discovered that she loved psychology, neuroscience and sociology.

“I never liked science in high school,” she says, acknowledging the irony, “It was my least favorite subject.”

By the end of the year, she’d decided on neuroscience as a major, even though she wasn’t quite sure “what to do with it.” As she shadowed and interned and talked with others, her path became clearer.

“It just clicked one day that I wanted to go into pediatrics, because I’ve just always had a passion for kids,” she recalls. Then, in witnessing the life-saving role of a physician assistant (PA) in the outcome of a family member, a more specific path emerged.

“Seeing how the PA completely changed a life around … I was blown away by it,” she explains. “It was the most beautiful thing I’d ever seen happen. This PA literally helped my loved one take control and actually live life again.”

Neal realized that being a PA within pediatrics is “where I belong. …There’s just something about aiding in physical and mental health, too, that drives me towards that.” And being a PA gives her many options.

“After being in pediatrics a few years,” she says, “I can be trained in emergency medicine or dermatology. You can switch up what you’re doing. You’re not stuck in one area your entire life.” Neal likes the fluidity as well as the freedom a PA’s schedule will give her to be a mother one day.

Neal also appreciates the breadth of her liberal arts education and how even the required classes that were unrelated to her major (but were some of her favorites) “will make me a better PA one day.” She explains how:

When you study neuroscience, it’s very easy to look at the physical side of everything. … But there is so much more to a person. Studying psychology, Western civilization, sociology and French — learning different languages, cultures and religions — makes you think about more than just the physical aspects of a person. Not that I wasn’t an accepting person before, but it’s definitely opened my eyes to different types of people. In medicine, you’re going to be seeing all different races, religions and beliefs. You have to be accepting and understand where they’re coming from in order to be the best provider that you can be.”

Part of this education includes being active on campus and in the community, seeking out experiences and connections with people from a variety of backgrounds “because they’re usually the ones who will have the most impact on you.”  Through Student Government Association, STEM Empowerment Club, her sorority, Phi Mu, the Pre-Health Club, the Pre-Physician Assistant Club and tutoring off campus, she gained leadership skills and a better understanding of how the community fits together.

Transylvania, in true liberal arts fashion, has provided us a set of skills to question the world around us, to think deeply about who we are and how we can impact others.

Of her four years at Transy, she says it is “more than what I thought it would be. I expected to get an amazing education, which I did. But I didn’t realize the affect some of the relationships would have on me. … It’s really exceeded my expectations.”

Speaking at Commencement 2019, Neal reminded the audience to “take time to reflect on the relationships you have made here at Transy. Think of your advisors, mentors, professors, coaches, and peers. Think about how they have impacted you and aided in your own path of self-discovery. And as you do, I hope you recognize that you have also influenced those around you.”