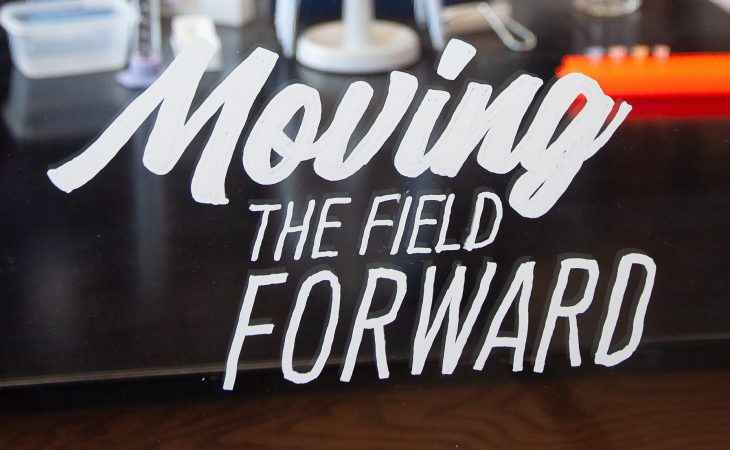 The following feature article appears in the Spring/Summer 2019 issue of Third + Broadway magazine, scheduled for delivery in June.

Mark Sirianno ’19 remembers his eureka moment. Alone in the lab one evening, a few years into his work with Associate Professor of Biology Paul Duffin, he opened the incubator and found that the Neisseria sicca bacteria, which scientists heretofore had deemed immutable, had, in fact, transformed. They had, Sirianno explains, “taken up DNA from their environment and incorporated it into their genome.”

In a world in which Neisseria gonorrhoeae is becoming resistant to antibiotics, portending catastrophic epidemics, any new light on Neisseria bacteria could be helpful — particularly, as Sirianno notes, when 75% of the human population carries non-pathogenic Neisseria in their nasopharynx (the cavity behind the nose).

“Every time you take antibiotics,” Sirianno explains, “it makes those Neisseria (in the nasopharynx) antibiotic resistant. If they can exchange DNA with the pathogenic version, it’s no wonder gonorrhoeae is becoming resistant so quickly and so efficiently.”

Sirianno is helping to prove that Duffin’s thesis is correct, that this nonpathogenic strain is subject to “inter-species genetic transfer.”

Yet who would know about the discovery or the broader implications if the researchers failed to write up their work clearly and concisely, and, ultimately, craft an abstract compelling enough to be accepted for presentation at a conference among peers?

“The process of science isn’t done until you’ve communicated it,” says Sarah Bray, professor of biology and interim associate dean for academic affairs. “It’s exciting to be learning something that no one else knows,” but, as she reminds her students at Transy, “you haven’t really participated in science until you have others read it, think about it and respond to it.”

But first you have to write it. And through the process of writing, a deeper comprehension develops.

Articulating the work is so much more than merely detailing what’s been done. “[Writing] helps us understand our science and think about what we’re doing,” says Bray. “We’ve gathered data, we’ve looked at it, we’ve visualized it, but that process of verbalizing it in a way for another individual to understand often leads to greater depth of thinking about what your results mean.”

For Sirianno, the writing process reveals whether he’s done a good job in his research. “Writing makes you organize the ideas and the process,” says Sirianno, who won second place in the microbiology undergraduate poster competition at the Kentucky Academy of Sciences meeting in the fall of his junior year. “It definitely shows you new things.”

Bray describes the linear structure of the end product of science writing: the universal format of an introduction followed by a methods section, then results and, finally, a discussion section. Bray notes, however, that she has improved as a writer in the sciences “by understanding that we often write in a very nonlinear way,” assessing the methods, for example, before composing the introduction. And that final piece of writing, she explains, “is really the springboard to asking: What is the next problem that I need to address in my work?”

“Writing is integral to science,” she says. “We give presentations and have conversations, but it’s really those peer-reviewed publications put out for the research community that move the field forward. So I don’t see science and writing as being separate; it’s the same thing. That’s how you do science.”

A William T. Young Scholar, Ronald is one of several Transy grads to win a National Science Foundation Graduate Research Fellowship, which is, Bray says, “incredibly competitive” and very much based on the written proposal. She sees these fellowships and postdoc grants as illustrations of the quality of the writing of Transy’s science grads.

Ronald, who also won the prestigious Walter Clyde Allee Award for best student paper (an early career award from the Animal Behavior Society), points to the skills she developed in a “writing- intensive environment,” at Transy, “both in the classroom, and as a Writing Center tutor.” All of that writing became a “natural extension” for her writing in demanding graduate programs.

The ability to write strategically, persuasively and concisely, drawing on specifics relevant to the application rather than on personal generalities, she says, helped her secure the NSF funding. And having the grant gave her the time and opportunity to devote all of her focus to the broad, interdisciplinary questions she first began to tackle at Transy as a double major in psychology and biology.

“I study animal behavior,” explains Ronald, who earned a Ph.D. from Purdue, a postdoc at Indiana University and, most recently, a tenure-track position in biology at Hope College, “so it really is the combination of both understanding the evolution of animals and why, historically, they make the decisions they do.”

Ronald is interested in why animals make their decisions and how they interpret the information around them. In evolutionary terms, choosing a mate is one of the most important decisions made, she notes, “because that is the decision that produces offspring, and that is what evolution works on.” Her work, particularly with birds and mice, investigates the larger questions of evolution but also drills down to the individual level, asking: “How does this one particular animal sense its world and make a decision?”

In doing so, her research is contradicting the long-held idea, for example, that all birds share the same perception of beauty in plumage or song when picking a mate. Her research shows that “not all animals agree about what beautiful is. The way they see and hear changes their interpretation of what is attractive. In that sense, it allows for animals to vary in their preferences.”

She acknowledges how Transy has been the model for her being able to span fields and labs in her work, to ask the big questions and not be intimidated.

Bray points out how Transy’s liberal arts education gives students “unique tools for understanding how people [and, in Ronald’s case, animals] look at the world differently and how they might interpret information.” The interdisciplinary approach trains students to communicate not just with academic peers, but with policy makers and the general public, and to translate their work into more “digestible” content for blogs, podcasts and social media.

For the past two years, students in Bray’s upper-level classes have been creating podcasts and blogs. Students look first at the peer-reviewed literature and write an annotated bibliography, then “translate” this very dense scientific information into the format of a podcast for the casual listener.

“The fact that students write across the curriculum here — they know these different modalities of communication,” Bray remarks.

Bray believes that essential questions in biology encompass ethics, politics and sociology. The answers require thoughtful, educated exposition, not a series of facts and numbers.

“Because big societal issues often involve these different disciplines,” she says, “one of the big things about learning to write and being a good writer is this ability to integrate ideas.” It makes a person a better communicator and, ultimately, “an active participant in conversations about the issues that we face.”

Sirianno, a philosophy and biology double major, tested these principles at Yale University’s Summer Institute in Bioethics, where he found his Transy training had prepared him to write for a highly educated, interdisciplinary audience that included scientists, philosophers and lawyers.

Being steeped in two different disciplines made it possible for him to do the research and understand the data that summer, he recalls, but also to present the results in a final form that was written with his diverse audience in mind.

“How you interpret and write about your findings changes what people will glean from them,” he notes. “I think it’s very important to be able to take that hard data and write about it in an eloquent, educational way, where you don’t lose any of the information and you don’t put in anything that’s not necessary. And that’s not something that’s easy to do. It takes a lot of practice,” he adds.

As he prepares to enter medical school at the University of Kentucky, Sirianno plans to continue his research and acknowledges how important writing will be in every facet of his future work, from lab work to ethics boards. “Medicine has given me a route to practice everything I’ve learned here at Transy and put it all together — from the philosophy, the research, the biology, to health care as well,” he says. “Writing has profoundly affected the way in which I think about just about everything.”

In July, Ronald begins her work as assistant professor at Hope College. She will have a research team of students that will meet weekly to read scientific articles and discuss project ideas. The goal, as at Transy, will be to present and publish the results. “Writing will definitely be a part of anyone who joins my lab,” she says.

“We will be writing all the time.”