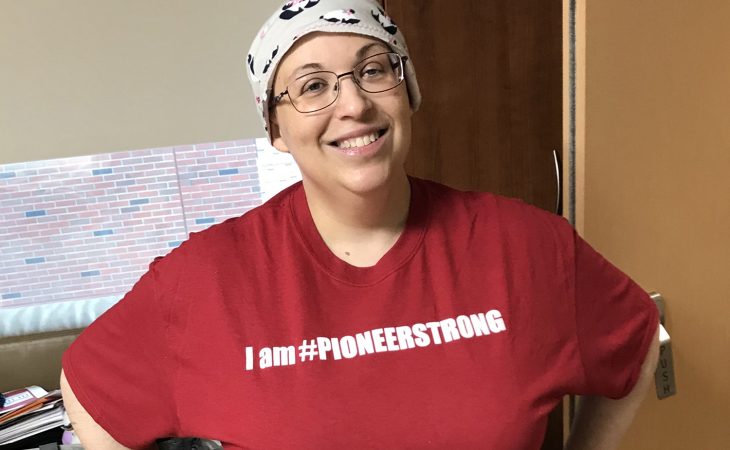 With a college pennant, pompoms and sundry sorority-related items in the room, Angela Roberts felt like she was living in a dorm again.

That wasn’t a bad thing, compared to where she really was.

The 1998 Transylvania University graduate recently spent 42 days in the hospital after being — totally out of the blue — diagnosed with leukemia. “It’s a long time,” she said. “I missed all of April.”

The reason the room reminded her so much of college was that she had received a tremendous amount of support — including many Transy-related gifts — from her Alpha Omicron Pi sorority sisters.

“It’s kind of like George Bailey at the end of ‘It’s a Wonderful Life,'” she said, meaning you often don’t think about how much you’ve touched other people’s lives until something major happens and you get an outpouring of support.

The Nicholasville woman received gifts from AOII sisters she graduated with — and from those she’s never met, including current students. She displayed paintings with inspirational messages, donned a hat with pandas (the sorority’s unofficial mascot) and taped a bunch of greeting cards around the room.

“I was just gobsmacked,” she said. “I can’t believe that they would do that.”

Besides the inspiration, these much-appreciated gifts provided a distraction from being stuck in the hospital with little to do but wistfully look out the window. “There’s just not that much to do at the hospital besides just waiting around for somebody to come in to draw blood or take your temperature or give you medicine,” Roberts said.

When McRae Stephenson ’97 dropped by, it wasn’t to check any vital signs. It was to see if there was anything she or others could do to help make Roberts’ unexpected stay at the University of Kentucky’s Albert B. Chandler Hospital more comfortable.

“As I was able to get a feel for what would best cheer Angela up, and what ways we could organize to help, friends and sorority sisters started coming out of the woodwork to support her,” said Stephenson, a fellow AOII and Transylvania’s assistant director of regional advancement and foundation engagement.

Stephenson and others helped spread the word on Facebook; for instance, they set up a group called Roses for Angela.

These connections that last a lifetime are a positive side of Greek life, which often is the subject of negative stories in the media.

“I think it’s the experiences we shared through our college years that fostered close bonds of friendship — whether we were planning events, organizing volunteer opportunities, or simply hanging out socially,” Stephenson said. “We have a common bond.”

Roberts’ support network during these past few months has included her family, coworkers and church friends, but to have all of those sorority sisters reach out to her was as inspiring as it was unexpected. “You can never have too much support when you’re facing something like this,” she said.

With the cancer now in remission, Roberts plans to return to her job in anesthesia billing this fall after more treatments over the summer.

She’ll have to go back to the hospital, but just for a week. Nothing like back in April when she accumulated so many gifts from well-wishers.

“When I finally got discharged,” she said, “it was like moving out of my dorm freshman year.”