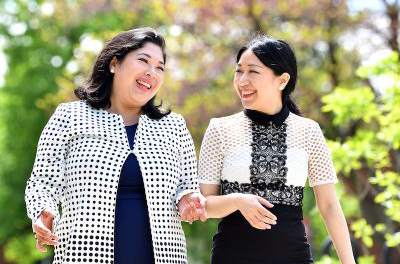 An excerpt of this feature article appears in the Spring/Summer 2019 issue of Third + Broadway magazine.

For two girls growing up in a small town, nothing seemed impossible. The daughters of immigrants, they learned how to live fully, to unleash every talent and to feel a responsibility to others. They aspired to lives of service that were inspired by the example of their family.

As their parents organized medical missions, community service and scholarships to help people in their country of origin, Lora Bofill ’94 and Mariju Bofill ’99 learned to ask what they could do for others. They witnessed the magnificence of gratitude and of giving in return.

“That sense of a higher purpose fueled my sister and me,” says Lora Bofill. “We always had dreams of doing a lot in our lives.”

The sisters traveled with their parents to other parts of the world. They dreamed of participating beyond the borders of their hometown. And they chose Transylvania University as the place to build their futures.

Lora Bofill, MD, MA, puts a unique spin on the familiar multi-faceted achiever known as a Transy Pioneer. An actor, producer and entertainment writer, she is an urgent care physician and is board certified in family medicine. She has served on medical missions abroad and, during her family medicine residency, was presented with the Harry Shaver Research Award for medical research on the smoking ban in Ohio. She’s been a guest lecturer and has published in medical journals.

Lora remembers being enthralled by acting during a production of “Romeo and Juliet” at Transy. While waiting backstage, a fellow cast member said, “Once you’re bitten by the acting bug, the desire never goes away.”  She tried to do pure science after graduating with a major in biology and a minor in music, but the artistic pull was too strong. After completing medical school, she took acting classes and graduated from the Ruskin Theatre School in Los Angeles.

Lora laughs now as she recalls how she managed to juggle acting auditions on top of 80-hour residency weeks. “My life would have made a good reality show,” she says. She reminisces about wearing her pager during acting classes in case one of her patients went into labor.

Without question, she notes, the time management skills, the attitude she developed at Transy helped her build simultaneous careers. “The word ‘impossible’ isn’t in my vocabulary,” she notes, thinking back on the approach to life she learned at Transy. “It’s only hard if I think it’s hard.”

It’s not always a conscious decision, she says. “It’s innate,” like the artistic side of her that needs to create or “move people through a story. It’s the artistic bug that doesn’t go away.”

Lora remembers her sister, Mariju, driving her to the first professional job she landed, a national commercial for America Online (AOL). Both ended up in the ad. Mariju, who had been the drama club president in high school, remembers acting in “The Crucible” at Transy and “loved being part of the theater family and the cycle of rehearsals.” But, for the political science major and history minor who graduated from Transy in just three years, the stronger call was to attend law school at American University, propelled by her interest in international human rights.

Even now, in her daily work as a diplomat, she says, “It’s very helpful to have the theater background – to be able to understand the different ways of communicating. … You always have to understand your script and your audience.”

Mariju Bofill’s ebullience brings a kind of disarming optimism to the most complicated issues. This comes in handy in the field of diplomacy — whether striving to redefine internal policies, building relationships abroad or serving as a political advisor. Her career shows how the ability to empathize, understand and communicate with people from disparate backgrounds is paramount to negotiating political complexities.

The diversity of her own background – growing up in a small town, from an international background, with a liberal arts education – makes all the difference. She also speaks fluent Spanish, French, Pilipino/Tagalog and Portuguese.

Mariju developed an international perspective early on in life as the daughter of immigrants. But she says her time at Transy provided the foundational experiences that she continues to draw on, particularly her classes with Jeffrey Freyman, professor emeritus of political science, who she remembers as always incorporating a global piece into the subject matter.

“[Professor] Freyman made me care about the world,” she says. “He gave me the concepts and definitions that I still use today.”

She also counts her study abroad and the program for first-year students, as essential to developing her commitment to international affairs and civil rights — with a special interest in representing Asian Americans. Mariju participated in Transy’s first semester abroad program with Regent’s College in London in 1997.

“It was important to me to be connected to my heritage,” she explains, and to “understand where we came from and how that affects where we’re going.”

In law school at American University, she was elected president of the Asian American Law Student Association. Later, in the U.S. Department of State, as president of the Asian American Foreign Affairs Association, she was instrumental in reversing a policy that once precluded employees, many of whom were Asian Americans, from serving in their home countries. The American Foreign Service Association honored her with the William R. Rivkin Award for Constructive Dissent: “… Recognizing that the lack of clarity and transparency in assignment restrictions hinders the department’s efforts to utilize its diverse workforce and denies employees the opportunities to apply their language and cultural assets to advance the department’s mission… .”

She also received the Department of State’s Equal Employment Opportunity Award for her leadership of the Asian American Foreign Affairs Association, which has become a model for federal affinity groups.

At American University, as a member of the International Human Rights Law Clinic, Mariju worked on various human rights cases.  The Clinic was famous for its work on the extradition of the Chilean dictator Augusto Pinochet and earning protected status of females facing genital mutilation. As a law clerk at the Department of Justice, she worked on voting rights, specifically in the South. She also clerked at the Environmental Protection Agency, focusing on consumer protections and pesticides.

“It was always very much the theme of public service,” she says of her journey, “ensuring that people from all walks of life and socioeconomic backgrounds were being treated equally and fairly under the law.”

After excelling in law school, Mariju Bofill passed the bar exam and was offered a clerkship with a federal judge in Washington, D.C. Committed to civil rights and interested in international affairs, she considered a career in the Department of Justice or with an NGO.

Selected as a Presidential Management Fellow, Mariju delayed her clerkship when the Department of State offered her a position. Two days into the fellowship, the United States was attacked by terrorists on Sept. 11, 2001; Mariju felt compelled to be of service. She remembers asking herself, “What talents do I have for my country? What could I do?”

Her first job was in the Office of the Coordinator for Counterterrorism. She became a multilateral officer working with the United Nations, the European Union, the G7 and NATO to ensure that the U.S. was coordinated with international partners on counter-terrorism laws and conventions. By the end of her first year of doing international work, she realized that she’d found her calling. Her career had taken a different turn, but she continued to make use of her legal training and found the “analytical thinking extremely useful.” By 2004 she’d joined the Foreign Service.

“Nothing has been more satisfying than being able to represent my country.”

In her current position, she is the Senior Coordinator for Interagency Affairs in the J7/9 Exercises and Coalition Affairs Directorate at U.S. Southern Command in Miami. On detail from the State Department to the Department of Defense, she works on government response to national security priorities in Central America, South America and the Caribbean.

“Anytime we engage with another country, that’s diplomacy,” she explains. “My military colleagues relied on me to give them the political, economic and social context of our official relationship with the country we visited.

“The stops we were making included the countries most affected by Venezuelan migrants as a result of the crisis in Venezuela – Colombia, Peru and Ecuador,” she explains, “mainly to address the issues of these countries’ national health systems being overburdened.” The ship also visited Honduras.

While on campus to receive Transylvania’s Distinguished Achievement Award, Mariju took time to meet with current Pioneers and faculty, sharing the Pioneer’s sense of “curiosity about the world” – so vital to a career in the foreign service. She was eager to impart the message and way of life that she and her sister learned from their parents and developed during their years at Transy.